If you're like me, and didn't get the chance to watch the game last night, you probably didn't believe it either when you read that in the game recaps this morning.  But sure enough, he actually did do it.  Here's visual proof: 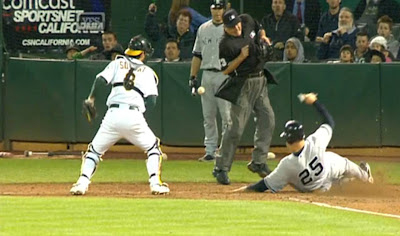 Is that the most improbable steal of home ever?  I know it took some brain farts on the part of A-Rod and the A's to make it possible, which makes it a bit of a fugazi steal of home, but this is still Mark Teixeira we're talking about.  He of the 16 career stolen bases and 5 times caught stealing .  Dude can run the bags with the best of them but he isn't exactly Lou Brock in his prime.

Cue the "you just can't predict baseball, Suzyn" sound clip from Sterling on that one.
Posted by Unknown at 12:26 PM No comments:

(Here's the poll.  Click for larger if you want a closer look at the hatred.)
The good news it that for the second year in a row, The Horse and Joba topped an MLB players poll conducted by Sports Illustrated.  The bad news?  It's the yearly "Most Overrated Players" poll.  And not only that, but Derek Jeter came in 3rd in the poll and Nick Swisher was tied for 4th.  So the 4 most overrated players in MLB are Yankees.  Now normally I would take something like this and use it as a soapbox to stand on and proclaim that it's the latest in the MSM's never ending quest to besmirch the good name of the Yankees.  But since it was actually the players who voted, I'll just say that it's a classic case of guys drinking too much haterade.

First, let's start with Swish.  Sure he's having a down year this year, but that hardly makes him overrated.  The guy is probably still underrated after the Yankees picked him up for parts off the scrap heap in 2009 from Chicago.  All he's done since putting on the pinstripes is be above average in every way imaginable.  He hits for power and gets on base plenty and plays a pretty good right field.  An OPS+ in the 120s and a wOBA of .376 over the last 2 seasons speak for themselves.

Now Jeter is an interesting scenario.  For each of the last 3-4 seasons, the argument could have been made that the guy was overrated.  His range had deteriorated, as had his power, and yet he was still praised by the MSM for his "playing the right way" style.  But now, I would make the argument that that high praise is no longer present when looking at Jeter.  He's a weak, groundball-hitting machine with next to no range left at short, and the media presents him as such.  For a guy his age playing a premium position at a below-average level, Jeter is probably perfectly rated right now.

Joba is an interesting case.  He probably gets put into this category because of all the chaos surrounding his status as a starter or reliever, which is unfair.  And while he does have a tendency to give up home runs in bad spots (career high 16.7 HR/FB % this year), and while I do tend to bag on the guy a lot, Joba has actually been pretty damn solid his whole career, and even better this season.  His FIP and xFIP numbers have always been below his ERA, he's getting groundballs at a career high clip this season (62.3%), his walks are down, and he's recovered some of the velocity and swagger that he had back in '07-'08.  With the Fraud Sawx shelling out 9 mil to Bobby Jenks and Dan Wheeler to completely shit the bed the way they have this season, it's hardly fair to call Joba overrated with the numbers he's put up.

Last is The Horse, and his case is just as ridiculous as Joba's.  For all the talk about how washed up he is, the guy is still 2nd amongst all MLB third basemen in SLG, 3rd in OPS, and 3rd in wOBA.  He may not walk as much as he used to, but he doesn't strike out as much as the great Kevin Youkilis, and he plays a much better third base defensively than everybody not named Adrian Beltre.  And surprise, surprise!  Guess who leads all third basemen in WAR with 2.1?  That's right.  Alex F'ing Rodriguez.  Opinions can be whatever people want, but the numbers don't lie.  Even at 35 going on 36 and possibly with some lingering oblique/back issues, A-Rod is still the best all-around third baseman in baseball.  How is that overrated???

What this poll boils down to is the players who aren't on the Yankees being sour grapes towards them.  People see how much money guys are making and they get jealous.  It's natural.  But being properly rated isn't all about money.  Sure it's a determining factor, but you still have to look at the production, and for the most part, the production of these 4 supposedly overrated Yankees doesn't support the claim of their overratedness.  Overpaid?  Sure, I'll buy that argument.  But not overrated.  Grow up, MLB guys.  Don't be haters just because you aren't lucky enough to be on the team with the most money.

Posted by Unknown at 7:39 AM No comments: