I can't even take one night off from this without some major news breaking.  The Yankees wasted no time in getting started on their Plan B without Robinson Cano, tonight reportedly agreeing to a deal with free agent outfielder Carlos Beltran.  Via Mark Feinsand, the deal is for 3 years.  Via Tim Brown, it's for $45 million.

The Yankees were in on Beltran from the start, but things seemed like they had cooled off after the McCann and Ellsbury signings.  With Cano now gone, the need for more offense was obvious and the return to Beltran doesn't come as a huge surprise.  The Yankees were reluctant to give him the 3rd year initially but apparently willing to do it now that Cano leaving gave them the extra money.  Again, I would have preferred Shin-Soo Choo, but Beltran is an upgrade over their current right fielder and should provide above-average production from that spot and as a part-time DH next season.
Posted by Unknown at 9:58 PM No comments:

So ummm ... yeah.  How about this week, huh?  Everybody's head is probably still spinning from all the Cano news and just like I did with Ellsbury I'm in the process of formulating all my thoughts on it so I can try to write them all out coherently tomorrow.  I really hope the Yankees have something real up their sleeve for a Plan B.  Bringing Cano back next year would have made a lot more sense after the McCann and Ellsbury signings, but I don't blame them for not wanting to match 10 years.  Have fun in Seattle, Robbie.  Send us a postcard from last place.  Now onto the links!

- On Monday, SJK of NoMaas offered up his take on the idea of Eduardo Nunez being a utility player in 2014.

- On Tuesday, Joe Pawlikowski of RAB took a look at Brett Anderson as a potential trade target for the rotation.  The way Oakland is wheelin' and dealin' right now, he's worth a look.

- On Wednesday, Derek Albin of Pinstripe Pundits used WAR projections to comment on the Yankees overpaying Jacoby Ellsbury and how he won't live up to the contract.

- El duque of It Is High... issued an open letter to Hal Steinbrenner urging him to keep the spending momentum going.  I'm fully on board with that plan.

- On Thursday, William Juliano of The Captain's Blog mused on how the new NPB posting rules could actually help the Yankees and other big budget teams.

- Chad Jennings of LoHud had all the news, notes, and quotes from the Brian McCann press conference.

- Jason Cohen of Pinstripe Alley wondered what number Jacoby Ellsbury will wear as a Yankee.  Obviously the 2 he wore in Boston are way off the table.  I bet he goes 22 and Vernon Wells gets something else until he's released.

- On Friday, Jason Evans of Yanks Go Yard profiled a few lower-tier free agent relievers the Yankees could go after.

- EJ Fagan of IIATMS/TYA commented on the improved depth and depth of talent in the Yankee farm system, something that needs to start coming into play more in the next few years.

- Daniel Burch of The Greedy Pinstripes broke down Grant Balfour's BIP results from 2013 to show how he might not be an ideal bullpen candidate for the Yanks.

- Roberto E. Alejandro of Respect Jeter's Gangster riffed on what the Yankees plan is and how it doesn't add up in his head right now.  Hard to argue with those points.  Given the money they gave to Jacoby, it was strange to see them hold their hard line on Cano.

- SG of RLYW compared WAR values and salaries to show how any kind of Plan B to replace Cano could put the Yankees in a worse position going forward after 2014.

This week's jam comes to us from Lil Dicky, the premiere white, Jewish rapper in the game right now.  Seriously, listen to "The Cypher" and tell me this guy isn't the shit.  You can't do it.

Under the tidal wave of Robinson Cano coverage this morning was a small bit of good news.  Joel Sherman reported that the Yankees and Hiroki Kuroda agreed to a new 1-year deal for 2014, worth $16 million.  According to Sherman's report, the deal comes with the same bonus package as this year's deal: $250,000 for reaching 190 and 210 IP and an interpreter.

The Yankee rotation needed serious help next year regardless of where Cano ended up.  Cash stated weeks ago that he was looking to add 400 innings this offseason and Kuroda should represent a significant chunk of that.  He wasn't great in the second half of this season, but he's still been very, very good in his 2 years in pinstripes and there's no reason to expect him to suddenly become less than good next year.  I have to think addressing the rest of the rotation becomes a bigger priority with Cano gone now.  Kuroda is a good first piece to get into place.
Posted by Unknown at 12:29 PM No comments:

Well there you have it.  After the broken down talks made it look like he was going to come crawling back to the Yankees, Robinson Cano has agreed to a 10-year/$240 million deal with the Seattle Mariners.  Jay-Z's negotiating ploy worked and it was the Mariners who came crawling back with a deal closer to what Cano's side was asking for.

A physical is scheduled for this weekend and a press conference Monday, so this things sounds legit.  I'm really surprised.  I thought the extra demand would scare the Mariners away.  The Yankees lose a big piece of their plans for next year and the loss of Cano's production will be almost impossible to replace.  The value of adding McCann and Ellsbury takes a hit, at least for now, and the Yankees will have to move forward with whatever backup plans they had in the works.  We already know Kelly Johnson was a part of it.

More on this as it becomes available.

** UPDATE 10:45 AM- Via Joel Sherman, the Yankees let Cano know they would be willing to go 7/175, but that still wasn't anywhere near the total dollars of the Mariners' offer. **

You know that desperation I mentioned a few hours ago?  Yeah, looks like that's all it was.  As first reported by Mark Feinsand, talks between the Seattle Mariners and Robinson Cano fell apart last night after Jay-Z changed the contract demands.  The Mariners were under the impression that Cano and his team were coming out to agree to the 9-year/$225 million offer only to be surprised and apparently angered when Jay-Z countered with a request for 10 years/$252 million.

There's no word on whether or not talks are expected to pick back up over the weekend or if the original Seattle offer is still on the table, but I can't imagine this will do anything to help Cano's case on the market.  Right now this looks like another attempt by his people to drudge up some competition and gain leverage in their talks with the Yankees and right now it looks like it's failed.  If other teams think Cano isn't willing to take 9/$225 mil to leave New York, why would they even bother making an offer that beats that?  The impression being given off is that Cano truly wants to stay with the Yankees, and now he might end up having to take their latest deal (7/170) to do it. 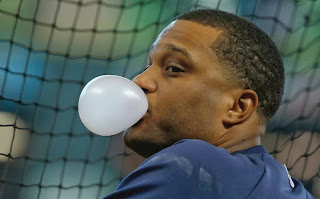 - Cano hit 27 home runs last year.  According to ESPN's HR tracker, only 1 of them wouldn't have made it out of Safeco Field.

This whole "Robbie to Seattle" thing reeks of desperation to me, from both sides.  Cano and his agents are desperate to get another team involved so they can try to put some counter pressure on the Yankees to budge from their offer.  Seattle is desperate to add some offense and become relevant in the baseball world again, and they are because it's their GM's final year and he needs to make a splash to save his job.

Cano's offense would take a hit playing half of every season in Safeco, but maybe not quite the hit you'd expect.  He'd instantly become "the man" on the Mariners next year and could easily become the face of that franchise.  How much is that really worth though?  And is it worth it to be the face of a franchise that nobody cares about if the Mariners don't get any better?  I'm still holding my stance that I need to know that the Mariners have made an offer before I start getting concerned about Cano leaving.  If they really are going to make this 9-year/$225 million one, Robbie will have a real tough choice to make.
Posted by Unknown at 7:05 AM 1 comment: