For those of you (like me) who missed this over the weekend because you were busy drinking your face off to celebrate the new year, John Sickels released his Top 20 Yankee Prospects list.  I'll direct you here for the complete list and Sickels' explanations, but quickly here's his top 10:

Interesting list to say the least.  I know I haven't seen many lists with Sanchez above either of the 2 Killer Bs, but I do like how Sickels included Phelps and Warren, something that Baseball America did not do.

Just a reminder, the AB4AR Top 30 will conclude tomorrow with the Top 5.  If you've been following along for the last week you should be shit-your-pants excited for this.
Posted by Unknown at 4:14 PM No comments: 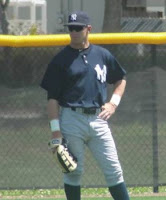 10) Slade Heathcott- OF- High-A Tampa
Drafted as a compensation pick in 2009 for the Yankees failing to sign Gerrit Cole in '08, Heathcott has at times looked like great compensation and sometimes looked like a potential bust in the making.  There were questions about Heathcott's durability and makeup when the Yankees drafted him, and he has lived up to those questions by suffering multiple shoulder injuries, the latest one shutting him down early this past season, and getting involved in an ugly incident in Charleston when he sparked a bench-clearing brawl with the Fraud Sawx Low-A affiliate.  Whether you agree with the concerns about Heathcott's makeup or not (and I happen to be in the camp that doesn't), there's no denying that those 2 occurrences in 2011 make him a bit of a wild card in the organization moving forward.

And yet Heathcott still ranks as a top 10 prospect on my and many other people's rankings because the baseball talent and potential to be a great 5-tool player is there.  Heathcott is still young, just turning 21 in September, and is a fantastic athlete at 6'1", 190 pounds.  His natural athleticism, top notch speed, and great arm make him a potential Gold Glover-caliber outfielder, and he was making positive strides in his approach at the plate in 2011 before being shut down.  After a 2010 season in which he posted a 33.9% K rate, Heathcott worked it down 27.0% this past season, and he balances his occasional hacker tendencies with a solid walk rate (7.85% in 2011, 12.0% in 2010).  He still hasn't developed the ability to hit the ball in the air consistently, so the power numbers aren't there, but his .279/.347/.437 line in 242 PA at Charleston and 1 game at Tampa show that he's trending in the right direction.  The shoulder problems are a huge concern, and it's unknown if Heathcott will be 100% recovered from his latest surgery at the start of the 2012 season, but if he is, I think the possibility is there to start him in Tampa and have him finish in Double-A. 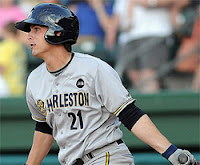 9) J.R. Murphy- C- High-A Tampa
Usually the forgotten man in the group of young Yankee catching prospects, J.R. Murphy used 2011 to establish himself as a legitimate prospect at the position.  Initially scouts questioned his ability to handle good pitching, but he made great strides behind the plate in 2011, enough that people now think he could stick there full time.  And when you add that to his solid all-around work with the bat, J.R. Murphy is a name we should all start paying more attention to.  Still just 20 years old, Murphy was putting together a fantastic season in both levels of A-ball in 2011 before a freak foul ball injury prematurely ended his campaign.

He's not a big kid by any means at 5'10"/170, but Murphy's approach at the plate is Yankee 101.  He's patient and willing to work counts and take walks if he doesn't get anything he likes, and he also has a tremendous ability to put the barrel of the bat on the ball and make solid contact (just a 12.8% combined K rate at Charleston and Tampa).  Murphy posted a .297/.343/.497 tripleslash for Low-A Charleston in 63 games to start 2011, good for a .359 wOBA, and although the numbers fell a bit upon his promotion to Tampa midseason (.259/.270/.365, .284 wOBA in 89 PA), the fact that he was able to continue to make contact and limit his strikeouts predicts future success at that level as well.  Murphy is a good athlete with a good head on his shoulders, as his improved defense was reported to be the result of lots of additional work to improve his skills.  If he can show that he's fully recovered from his injury, he could be another candidate for a split season in Tampa and Trenton in 2012. 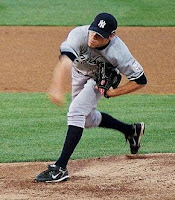 8) David Phelps- RHP- Triple-A Scranton/Wilkes-Barre
One of the many examples of the Yankees' ability to find great value in the middle rounds of the draft, David Phelps is arguably the most well-rounded starting pitcher in the Yankee farm system.  He breezed his way from Charleston to SWB in just 2 full seasons, posting sub-3.00 ERAs and FIPs along the way, and was among the group of young guys on standby to make spot starts in the 2011 Yankee rotation if needed.  After throwing 158.2 innings in 2010, Phelps did experience a bit of a hiccup in 2011 as injuries forced him to miss some time, resulting in only 18 starts at Triple-A and only 114.1 total IP.  But Phelps' production hardly suffered as a result, as he pitched to a 3.19/3.69 split with 7.55 K/9 and only 2.18 BB/9.  Based on past history, it's likely that all of those numbers would have been even better had he not gotten hurt.

25 years old and good-sized at 6'3"/190, Phelps has shined in his MiL campaign thanks to the one thing that most college pitchers come into pro ball with that their HS counterparts do not: command.  Phelps is a 3-pitch pitcher: fastball, curveball, change.  His fastball sits low-90s and can be thrown for strikes on either side of the plate, his curveball has great movement and is used as an out pitch, and his changeup, while not rating as above-average, can be effective when he locates it.  And it is that location and command that allows Phelps to be successful.  In his 3+ years in the system, Phelps has never posted a BB/9 over 2.50 at any level, and it is his ability to consistently throw strikes and get ahead in the count that allows him to make the most of his stuff.  Expectations are for Phelps to come into the 2012 season as one of the top starters in a stacked SWB rotation, and if he stays healthy he could be among the first in line for a promotion again should the Yankees need help. 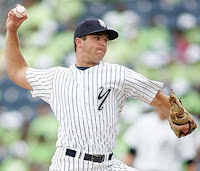 7) Adam Warren- RHP- Triple-A Scranton/Wilkes-Barre
If David Phelps is David Phelps (and we know that he is), then it would be fair to say that Adam Warren is like a David Phelps 2.0.  Also a polished college pitcher, Warren gets the nod over Phelps in the rankings because of his slightly better stuff and the fact that he had a healthy 2011.  After having a dynamite 2010 campaign between High-A Tampa and Double-A Trenton, Warren was promoted to Triple-A to open the 2011 season and stayed there all year long.  His first year at Triple-A was a bit of a learning experience, as evidenced by his 3.60/4.05 ERA/FIP split and 6.56 K/9 (far below the 9.77 K/9 he posted in 52.1 Double-A innings in 2010).  But Warren racked up 152.1 innings, meaning the reigns will be officially off of him now as far as innings totals go, and he gained valuable experience in how to handle better hitters and mix his pitches to work through an order multiple times.

Warren is a little younger than Phelps at age 24, and a little bigger at 6'3"/215, and he uses that extra size to add a little more oomph to his pitching repertoire.  Warren throws 3 types of fastballs (4-seamer, 2-seamer, cutter) all in the low-90s, a curveball that is swing-and-miss good when he locates it, and a circle change that he uses to generate groundballs.  The curve still needs some work, but with stuff like this and solid command, Warren could project as a #3-#4-type starter at the Major League level.  The Yankees were aggressive with Warren in starting him at High-A Tampa in 2010 and then promoting him to Triple-A to start 2011 and I expect that to pay dividends for him in 2012.  If he can get back to what he showed in the lower levels with this experience, he should fall in line behind Phelps as the next to get the call if/when the Yankees need starting pitching.

6) Mason Williams- OF- SS Staten Island
There was probably no player in the entire Yankee MiL system that generated as much buzz in 2011 as Mason Williams did.  Drafted in the 4th round of the 2010 draft and then signed to a $1.5 million bonus, Williams lived up to the hype in 2011 and then some.  He hit .349/.395/.468 in 298 PA for SS Staten Island along with 20 XBH, 42 R, 31 RBI, and 28 SB, good for a .404 wOBA and a 149 wRC+.  Williams also flashed elite defensive skills in center field thanks to his fantastic speed and a laser arm, and led the Staten Island Yankees to NY Penn League championship.  Oh yeah, and he's a left-handed hitter.  I said I was bigger on production than tools, but when you look at what Mason Williams produced in 2011 and the tools he has, it's an absolute no-brainer to include this kid in the top levels of any prospect list.  When a guy only has 1 year of short-season A-ball under his belt and teams are already asking for him in trades for people like John Danks and Gio Gonzalez, you know you've got something special.

Williams is wiry at 6'0"/150, but being just 20 years old he has plenty of time to add some bulk to his frame.  That lack of weight right now is likely the explanation for his lack of power (just 3 HR in 298 PA), but Williams used his speed to his advantage to take extra bases and will continue to do that as he advances through the system.  While his patience at the plate could use a little work (6.7% BB rate), Williams did show a solid ability to put the ball in play in 2011 (just a 13.8% K rate), and that should serve him well as he continues to fine tune his swing and adjust to better pitching.  And while his speed is a huge asset for him in the outfield and on the basepaths, Williams will need to improve his base stealing ability, as he has 12 CS to go along with his 28 stolen bags.  Williams was considered very raw coming into the 2011 season after he only played in 5 GCL games late in 2010, so the fact that he had the type of season he did in 2011 and still has plenty of room for improvement is very exciting.  Williams should get his first taste of a full season with Low-A Charleston to start 2012, but I wouldn't be surprised to see the Yankees fast track him to Tampa if he continues to produce like this.