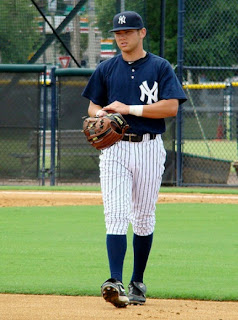 (Photo used courtesy of Scott Tidlund.)
On the heels of their interview with Tyler Austin earlier in the week that I linked to yesterday, NoMaas struck back with another interview yesterday, this time with 3B and 2011 1st round pick Dante Bichette Jr.  I would have to say my favorite part was this comment by Bichette:

"I want to be more consistent with my approach and learn how to make adjustments quicker. Instead of making an adjustment after a game and realize I was messing something up, it would be a lot better if I could make the adjustment during a game or an at-bat."

That's a very mature and reasonable goal to have for the season for someone still just 19 years old.  I like the fact that Bichette is already starting to focus on the mental nuances of the game and not just the physical/mechanical tools.  Like Mason Williams, Bichette comes off as a very mature, disciplined young man with a good head on his shoulders who understands that he still has a lot of work to do to become great.  There's no doubt that growing up the son of a former Major Leaguer helped shape younger Dante's approach to baseball and I can't wait to see what he does this year in his first taste of a full-season league.

For my take on Bichette, check out my write-up on him from the AB4AR Top 30.  I had Bichette considerably lower than most of the prospect lists that have been coming out lately, for the sole reason that I didn't want to rush to judgement on a kid who came in with a lot of question marks without seeing him in a full-season league.  I sold Bichette a little short, predicting he'd start the season in SS Staten Island, and now I imagine the Yankees are going to be more aggressive and start him out in Charleston.  If Bichette can put together another solid season in his first full season, he'll be a lock for my mid-season Top 10.
Posted by Unknown at 3:43 PM No comments: 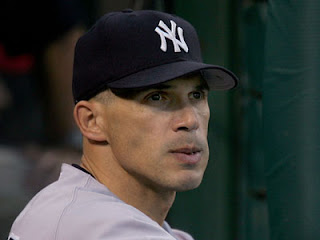 ("Hmmmm, Damon or Matsui?  Damon or Matsui?")﻿
While making at appearance at the Modell's in Times Square yesterday, Joe Girardi shed some insight on where his preferences may lie for a left-handed DH.

"When you think about Raul Ibanez, he has had success wherever he has [gone]... "

"Obviously, we know what Johnny and Matty [Matsui] have meant to this organization over the years, and how they've been successful in New York.  I'm curious to see how it is all going to shake out."

"I can't tell you it is going to be one of those three guys, or anyone. But obviously, we know they know how to play here."

Well we know Joe likes his veterans, so this is really no surprise that he wouldn't mind having one of the 3 guys he's most familiar with and he thinks are most familiar with Yankee Stadium.  But how good are these 3 as potential fillers of that lefty DH spot?

Matsui, who is younger than Damon, might actually be the most shot out of any of these 3.  He hit just .251/.321/.375 in 2011, and his reverse splits vs. right-handed and left-handed pitching is even more severe than Damon's (just a .291 wOBA vs. RH).  Matsui is also practically incapable of playing the field, something that Damon can still do if needed.

Out of these 3, I think Damon's ability to still play the field and run the bases at a respectable level tips the odds in his favor, and he should bounce back a bit against righties hitting towards the short porch in right.  But I'm not sure I would say I'm as big a fan of any of these 3 as primary options for the DH spot as Joe seems to be.
Posted by Unknown at 10:56 AM No comments: