Night & Day With The Fastball

It doesn't look like a huge difference but last night's plot is noticeably more concentrated in the lower half of the strike zone.  The majority of his fastballs against Tampa were middle-up, and when you're throwing a low-90s fastball in that part of the strike zone you're going to get beat up.  Last night, CC's average 4-seamer velocity was 91.9 MPH, slightly up from the 91.1 MPH average on 5/26.  That little bit more velocity and better location can make all the difference when you're facing the best hitters on the planet and last night it did.  If this is a continuation of an upward trend with CC's fastball, I don't think we have to worry about him moving forward.  I think he's going to be just fine.
Posted by Unknown at 2:27 PM No comments: 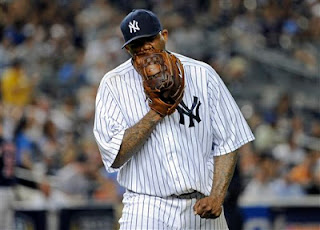