The MLB amateur draft starts tonight, which is always big news if you're a baseball fanatic.  Admittedly, I am not as big a draft freak as others, even though I love me some Yankee prospects.  I just don't have the time or the resources to follow up on all the potential talent out there at the HS and college level, so I leave that to the professionals who do and get my love on once guys officially become Yankees.

Last year's crop of talent was a lot of high-upside, low-risk variety from what I understand, and the Yanks are already getting solid returns from the likes of Rob Segedin (3rd Rd.), Tommy Kahnle (5th), Kyle Roller (8th), and Dan Burawa (12th) in A-ball and when short-season SI starts up, we'll get another look at the Cito Culvers and Mason Williams' of the world.  And with the Yankees not picking until the 51st pick this year (thanks a lot, Randy), expect them to be aggressive on someone who drops down the board from their slot.

And that right there is the extent of my 2011 MLB Draft preview.  Like I said, I'm not exactly Mel Kiper when it comes to this and I don't try to be.  If you're looking for excellent draft coverage, check out the stuff from the boys at The Yankee Analysts and anything that Mike Axisa writes about at River Ave. Blues.  Once the draft is over and I get a chance to follow up on these guys' thoughts, I'll weigh in with my take.  Maybe.  Until then, follow them and trust what they say.
Posted by Unknown at 12:45 PM No comments: 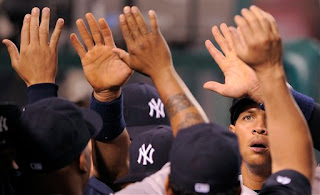 (High fives all around!  Courtesy of The AP)
- Before they went out on the road, I said I would be happy with a 5-4 record from the Yankees on this 9-day tour of some of the best starting pitching the AL has to offer.  So the fact that they came in 6-3 and extended their lead in the AL East is more than fine with me.

- That being said, it is a bit frustrating to look back on the series and see just how close the Yankees were to going 9-0.  A few hits with RISP here and another fluke Mo BS there in Seattle, and just a couple hits anywhere in the first game against Anaheim and things would be looking really bright right now.  I hate to rain on the parade by saying that there's always some "yeah, but... " scenario with this year's Yankees, so I just won't say it.

- A theme for the 2011 season that continued through this trip was the solid starting pitching.  From the end of the Seattle series through the Oakland one, the Yankees got 4 straight good performances from their rotation: back-to-back lights out jobs by CC and Colon followed up by 2 solid starts from Freddy and A.J.  I don't care who you're playing against, 6 runs allowed over a 4-game span is damn good.  CC followed up his beauty with another gem Saturday against the Angels and Colon was pretty decent yesterday, so the rotation continues to at the very least exceed expectations and at the most carry the team.

- The "Get Jorge The Hell Out of the DH Spot" campaign is in full swing now.  He started the trip hitting .178/.298/.357 and he finished it hitting .178/.290/.349.  He had 2 of his 3 hits for the whole trip yesterday, and even then he managed to ruin the double by inexplicably trying to stretch it to 3rd.  I don't care if it's more ABs for Andrew Jones, more for Chris Dickerson, or more for Chavez when he comes back.  If the Yankees aren't going to call up Jesus now, they need to do something with what they've got because Jorge is D-U-N DONE.

- Robbie Cano showed some signs of breaking out on the trip, getting 10 hits (6 for XB), scoring 6 runs, and also driving in 6.  His patience and selection at the plate still leaves a lot to be desired, but he is getting back to producing for a run-production spot in the lineup.

- Similar situation for The Horse, who also gather 10 hits, 7 runs, and 7 RBI over the 9-game trip.  He looks more comfortable at the plate and his swing looks much more in tune with his body than it did a few weeks ago.  Joe just needs to keep the guy healthy and give him a day every week at DH to do so, even if it means putting people in the first-base seats at field level in danger by playing Nunez at 2rd.

- I know he's The Fireman, but "The Magician" might have been a more appropriate name for D-Rob yesterday.  He pulled a David Blaine, completely setting up his own death-defying situation by walking 2 men to load the bases before managing to escape right before our very eyes without allowing a run.  Ta-da!!!!

- If all you're doing is looking at Mark Teixeira's BA and complaining that he's not playing well, then you're an idiot.  The guy is straight raking right now, and if the 18 HR and 41 RBI don't do it for you then maybe the .914 OPS, 149 wRC+, .394 wOBA, and career high .291 ISO will.  Just a little BABIP luck (Teix's is currently .236, 32 points below his career low, which was set last year) and we're talking about Teix as the leading MVP candidate instead of C-Grand and Jose Bautista.

- Props to Joe for ditching the formula yesterday in the 6th, going to D-Rob early to preserve the lead, stretching Joba to get through the 7th and the 8th, and finishing things up with Mo.  A 6-3 trip looks and feels much better than a 5-4 one, Joe knew it, knew his horses were rested, and rode them to victory.  If only he could do that all the time.

- Now that the Yankees are coming back home, the Jeter 3,000 watch will kick into high gear.  Just one question, if his next 14 hits are all seeing-eye grounders through the hole at short, do we still applaud?

- Best highlight of the trip, hands down, was the video of Torii Hunter falling into the stands on Cano's HR on Saturday as the small contingent of Yankee fans parted like the Red Sea and let him faceplant into the concrete.  Call them classless if you want (haters), but you gotta give Yankee fans credit.  They know when to get involved and when to stay out of the way.

- Off day today, then the fahckin' Sawx come into town for 3 starting on Tuesday.  The Yanks have pushed Nova back a day to line up Garcia, A.J., and CC for the series finale, while the Sawx have scratched Clay Buchholz from his Wednesday start and will instead throw Tim Wakefield.
Posted by Unknown at 8:28 AM No comments: