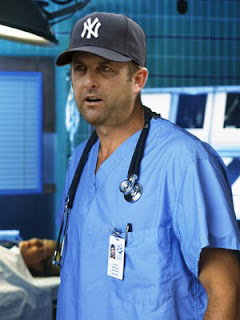 (Dr. Long recommends AB4AR to all his patients.)
Posted by Unknown at 12:45 PM No comments: 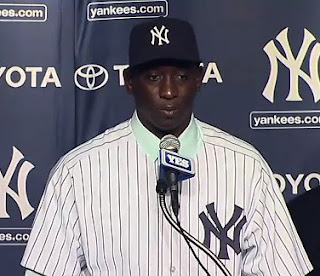 (Yes, Rafi.  You're allowed to be sad after last night.)
So far this year, the few times Joe has been able to use his desired formula with his pitching staff he has gotten positive results.  It worked on Opening Day and it worked on Monday night in Nova's start.  Last night, however, was a different story and Joe went back to the well in a situation that didn't call for it and it ended up costing the Yankees a victory that should have been in the bag.  Here's how:

- CC being lifted after 7 shutout innings.  Why was CC even taken out after 7?  He had been solid all night, had the bottom of the order due up, and would have had the desired lefty-lefty match-up if Gardenhire decided to pinch hit Morneau and Thome the way he did with Soriano in the game?  When your ace has already given you 7 shutout innings and doesn't have a superhigh pitch count, he at least deserves the chance to go out there and get another out or 2 in the 8th.

- Soriano being brought in to start the 8th in a 4-run game.  This is where Joe made a bad decision (lifting CC) worse by going to Soriano and trying to stick to the formula in a situation that didn't call for it.  Soriano had just pitched yesterday, there are reports of diminished velocity on his part going around, the bottom of the order was coming up, and it wasn't that close of a game.  That's D-Rob time all the way.

- Joe waiting too long to take out Soriano.  It was clear almost from the word "go" that Soriano didn't have it last night.  Not his fault, sometimes it happens.  Especially when it's early in the year, your arm strength isn't all the way up, and you just pitched the day before.  As soon as Soriano walked Thome, Joe should have taken him out and gone to Boone Logan or the already warm and aforementioned D-Rob.

- D-Rob never getting into the game until the fire was out of control.  I can understand Joba getting the 7th-inning role over D-Rob.  He's earned it.  But what the hell is D-Rob's role on this time?  Designated Bullpen Warm-up Guy?  Joe has had him up in almost every game they've played and yet he's only pitched in 1 game so far.  Newsflash!  The guy averages 10+ K/9!!  And you're not going to bring him in to face Danny Valencia to start the 8th inning of a 4-run game???

- Nick Swisher in right field on the bloop double.  Dude, what the hell were you doing out there?  And what was with that goofy slide??  Stay on your goddamn feet and keep the ball in front of you!  That's basic baseball!  Fundamentals!!  TOM EMANSKI!!!!

- Joe's overall approach to the game.  As friend of the blog Brien Jackson of IIATMS pointed out, Joe managed to get Mo a save instead of managing to win the game.  And that ties in to my point about Joe sticking to the formula and the numbers instead of making like Charlie Sheen and sticking to winning.  Soriano never should have been in the game, D-Rob never should have been called in to clean up the mess.  In a high-leverage 8th-inning situation, it's Mo time.  Shut the team down, keep the lead intact, and if you have to use somebody else to finish the 9th to preserve Mo, then so be it.
Posted by Unknown at 8:19 AM No comments: