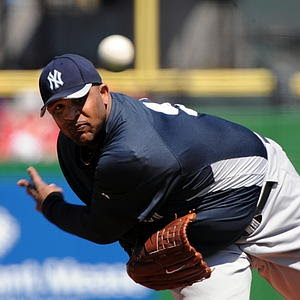 Why does anybody care that CC pitched like shit yesterday? Kevin Kernan was practically inching himself towards the ledge in his article this morning, bringing up questions about CC's career innings total coming back to haunt him this year and saying the Yankees "need" CC to replicate his 2009 season this year, all while attempting to wrap those boneheaded theories up in an "It's All Good" coating that was obvious even he didn't believe.

Newsflash, kids. CC is just fine. He had a terrible outing in his second ST start last year and look what it got him? 19 wins, some Cy Young votes, an ALCS MVP, and a bunch of beer-soaked World Series Championship memorabilia. If anything, people should be writing articles about the genius approach CC is taking to repeating last year's success, right down to his meticulous re-enactment of last year's Spring Training. CC doesn't need Spring Training any more than he needs a pair of Lycra bike shorts. It's old hat to him and it serves no other purpose than to let him iron out any problems in his mechanics (which he was fully aware of after yesterday) and build up just enough arm strength to be ready to go 6-7 innings without issue once the real season starts.

And this theory that the Yankees need CC to be a work horse again this year is completely asinine. They are going into this season with a deeper rotation and what will eventually be a deeper, better bullpen than last year's model. The plan should be to try to limit CC's innings as much as possible in the regular season to keep him fresh for the playoffs. I like complete games as much as the next cat, but if you can get CC out after 90 pitches and 7 great innings in May and June and July knowing you've got some combination of Mo, Joba/Hughes, Marte, etc. in the 'pen to lock down the last 2 innings to save that little bit of extra wear and tear on him instead of sending him out for the 8th, you do it. Period. That's why the Yankees brought in Javy Vazquez and why Cash signed Chan Ho Park; so that we don't have to watch a repeat of 2009 where guys like CC and Andy Pettitte are being worked to the bone. If the Yankees end up NEEDING CC to throw another 230 innings in the regular season this year, that means other guys in the rotation/bullpen aren't holding up their end of the bargain and that's not good for CC or the team.

So everybody calm the fuck down about his crappy outing yesterday. He knows what he did wrong and he knows how to fix it. Don't bring up the $161 million contract; don't mention anything about what he did last year, and don't even try to argue that the Yankees are counting him on for a monster year this year. Let CC do his thing and just keep counting down the days until he knocks Boston's dick in the dirt on Opening Night.
Posted by Unknown at 7:49 AM No comments: