Righties Still A Problem For A-Rod 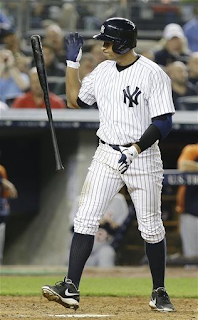 It was nothing earth shattering, but some might say they were a little surprised at the results of Alex Rodriguez's first few games back from the DL.  He had a hit in each of his first 3 games against the White Sox, drew a few walks, put some good swings on balls, played the field well, and still looked like he had enough power at the plate to be an offensive threat once he gets his timing back.  But those 3 starts were against left-handed pitchers, the type of pitcher against whom A-Rod is most effective.  In his first game against a righty starter last night, things didn't look so good.

A-Rod went 0-3 with 2 strikeouts last night against Tigers starter Rick Porcello.  The same Rick Porcello who's the 5th starter in that rotation and not exactly a "blow you away" type of right hander.  A-Rod struck out swinging in his first 2 at-bats at nothing but low-90s fastballs and looked overmatched doing it.  His getting frozen by a nasty slider in his final at-bat in the 8th happens to the best of hitters, but the lack of bat speed against Porcello's fastballs was a flashback to last year's ALCS and a reminder that Alex has declined tremendously against right-handed pitching.

Joe has him out of the lineup today after batting him 5th yesterday.  It'll definitely be worth watching what he does with A-Rod against righties if Alex really struggles against them.
Posted by Unknown at 12:06 PM No comments: 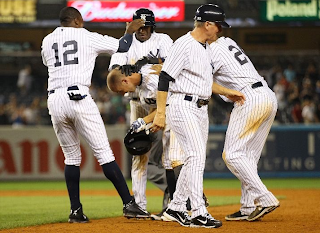 Whew!  Thank goodness for Brett Gardner's BABIP luck, because I don't think I could have taken 2 straight losses like that with blown Mo saves.  It's part of every season, we know this by now, but to have Mo blow 2 saves the way he did and lose those 2 games during a time when the Yankees have basically shoveled dirt on their own playoff hopes would have been crushing.  As it is, all he did was prevent Ivan Nova from getting another much deserved win.  Nova was on again and did all he could to pitch his team to victory.  He didn't come away with the win, but as long as the team did that's all that matters in the end.

- The lineup staked Nova to an early lead against Detroit starter Rick Porcello on an Alfonso Soriano RBI groundout in the bottom of the 1st and a Robinson Cano 2-run double in the 3rd.

- Nova made that stand up through 7 strong innings.  He worked around some trouble, but didn't surrender a run until the 7th, when he gave up a leadoff double and a ribbie single to Miguel Cabrera.

- It was Cabrera that blew up Mo's spot in the bottom of the 9th.  Down 3-1 and already in a 1-2 count, Miggy fouled 2 straight pitches off himself and looked like he was going to swing and miss just to get the at-bat over with.  Mo tried to throw a 4-seamer by him 2-2 and left it over the heart of the plate.  Cabrera, on 1 leg basically, hit it out to dead center to tie the game.  Just gotta tip your cap.

- Jayson Nix walked to start the bottom of the 10th, moved to second on a C-Grand hit, third on a wild pitch, and with 2 outs came in to score the winning run on Gardner's seeing eye single through the left side.  Like I said, whew.