At What Point Would The Yankees Consider Trading Robinson Cano? 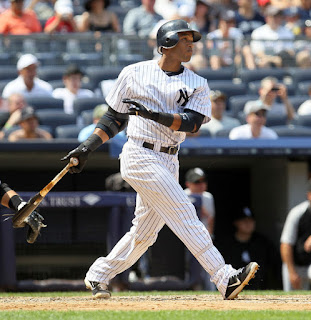 Picture this.  It's sometime around the All Star Break, and the Yankees are floundering.  Andy is on the DL again; CC has had issues with his surgically-repaired elbow and spent a 15-day stint on the shelf as well; Hirok has regressed after his heavy 2012 workload; Phil and Nova are pitching about the same as they did last season.  Jeter's return from his ankle injury has been tough and he's still having to take days off to stay healthy enough to play; Youkilis is underperforming and on the DL with Andy; C-Grand is still striking out a lot, Teix continues to decline, and Ichiro is pre-trade Ichiro and not the post-trade version.  The team is hovering around 3rd or 4th place in the AL East, 13 games out of the division lead and 10 out of the last Wild Card spot.  It's the worst worst-case scenario imaginable, but one that honestly has a non-zero chance of happening.  If that were situation at the ASB, would that be enough to inspire the front office to trade Robbie Cano?


Trading Robinson Cano is something that's been talked about in some circles around the blogosphere recently, but not nearly as much as the talk about extending or re-signing him after this season.  TYA weekend ace Mike Jaggers-Radolf posed the question on Monday, albeit not in the end-of-the-world context that I just laid out, and it is a question that needs to be asked and an option that needs to be considered.  There are a lot of things, like the ones mentioned above and in Mike's post, that could conspire to keep the Yankees out of contention this year, and a payroll ceiling looming for next season that Cano's new contract could make or break.  Trading him at the deadline would be a no-doubt signal that the Yankees were punting on the 2013 season, and also 2014 as well.  But if things take a turn for the worst this season, wouldn't that be the logical decision to make?

As the best player at his position and one of the handful of best players in the game period, Cano would fetch quite a prospect haul in return, even as a rental.  His long-term production potential is still a mystery, but he's still in his prime right now and could bring back a couple of young Major League-ready players, something the Yankees could desperately use, and plenty more.  With three 1st-round draft picks already locked up for this year's draft, a strong lower MiL level core moving up the ladder, and Manny Banuelos coming back in 2014, adding another collection of prospect talent would give the Yankees a strong foundation to build their future core and payroll flexibility to make the $189 mil budget goal less stressful.  It would probably mean some hard times for the next few years, but it would be a great opportunity to reload for the next generation after the current Jeter-Teix-A-Rod-centric era.

But who would really be in the market for Cano?  The Dodgers are clearly the 1A to the Yankees' 1 when it comes to biggest free agent contenders, but after all the moves they made last year would they be willing to give up another group of young players to add Cano when they could just keep the players and try to win the bidding for him a few months later?  Other big market teams like Bahhston, the Angels, and the Rangers either already have good players at second base or have spent a lot of money on big FAs lately or both.  The Phillies have seen first-hand how quickly a second baseman can deteriorate when he gets into his 30s and would probably stay out of the bidding.  And any other serious contender who could use an offensive boost would have to think long and hard about giving up the type of prospect package it would take to get Cano just to risk losing him to free agency after the season.  Teams that haven't done that, like the Giants, Braves, and Nationals, are reaping the benefits right now.

The Yankees are fiercely loyal to their homegrown stars.  That's why Derek Jeter is still playing shortstop every day, why Jorge Posada was allowed to stay behind the plate every day long after he had lost his ability to be an effective defensive catcher, and why Phil Hughes might end up getting a big chunk of money to stay in pinstripes even after "failing" to live up to his mid-2000s prospect hype.  Cano is the best homegrown player the team has developed since Jeter, and he's the straw that stirs the Yankee drink.  Based on that and past history, he should be a lock to be finishing his career in a Yankee uniform, but the way things have played out have made that much less of a sure thing.

Cash and ownership have already put themselves in a bad spot by not trying to work out an extension earlier and by setting a payroll budget at the same time Cano is primed to headline the upcoming free agent class.  If they are serious about continuing to field a championship-caliber team, re-signing Cano should be their top priority next offseason.  But the team constructed for this season is already not up to your typical championship-caliber level, and if things go poorly then it really might be time for all parties involved to consider the dreaded "R" word.  Rebuilding is not something that's in the Yankees' vocabulary, at least it hasn't been for many years, but if they get to a point where it's starting to look like a reality, moving Cano would be a great way to start it.  The question is, what would it take to make that happen and would the Yankees have the balls to do it?
Posted by Unknown at 12:59 PM

I've listened attentively to all your pessimistic bullshit all winter and now you've gone over the edge. Maybe you just don't have anything to write about and are wallowing in some kind of self-induced hysteria.

But I am up to my neck with your gloomy outlook and all the dire, negative nonsense coming out of your blog this off-season and I've had enough.

So, I'm casting off!

All this negative energy is really really bad for the brain Brad - and it's no wonder nobody is responding anymore to your rantings. It's just poison.

If you were a Cubs or Astros fan, I could see where you would be down and out, but these are the FUCKING NEW YORK YANKEES you're talking about! MY TEAM! GET YOUR HEAD OUT OF YOUR ASS!!!!

So goodbye for now! There must be some people out there who are looking forward to an exciting season, but you are not one of them. Since October your blog has been bile!

I'll check back in with you in a few months when your meds starts kicking in again.

Honestly, the way they finished the year last season, and the moves this team has made these last couple of months has me with low expectations for 2013 too. When the season starts tho, we're gonna expect them to win every game anyway, and hope that it all clicks. I love watching baseball. Gut feelings about what's gonna happen next. Like calling a home run. My gut is 2013 is gonna be a clunker. Not much there to feel good about IMHO. So if ABlog brings up some negative stuff that's not out of the realm of possiblility, there's nothing wrong with it. But bring on opening day, and we'll all have hope for the season. And we'll told ya so when it goes to shit.

You say some teams including the Giants never get into moves like this. But 2 seasons ago they gave up a top pitching prospect to the Mets for Carlos Beltran.

Id like Cano traded asap. Hes chemically enhanced and his bestseason was 2011. Cashninja get a haul for this chump!

And you're basing that chemical enhancement in 2011 accusation on what??