Another Day, Another Walk-Off 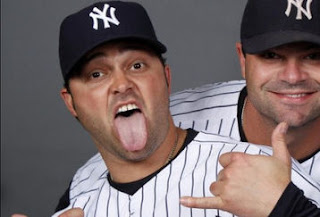 This Story Sums Up The Red Sox Season

“Janet Marie was told to go because Linda’s taking over the whole damn place,” said one person familiar with Smith’s exit. Another source said, “Janet was thrown under the bus and everything is a mess as a result of the young bride. The Chinese symbol for conflict is two women under one roof.”

Smith, 51, recently ended her eight-year stint with the Sox. She is credited with sparing the storied ballpark from the wrecking ball, installing Monster seats and improving the 97-year-old stadium.

The 30-year-old bride worked for her family’s Boston development firm, which is transforming a former raincoat factory in the Bulfinch Triangle into luxury condominiums.

A third source said the conflict centered on factors that have been brewing within the Sox organization since Henry bought the team in 2001 for $660 million and hired Smith to restore the park.

In one camp were Sox staffers who praised Smith for encouraging Henry to buy properties around the ballpark to keep developers from building apartments or offices that could tower over Fenway.

But others within the organization wanted the Sox to maximize the property the team purchased under the name of New England Sports Ventures.

Since 2002, the Sox have spent millions for Town Taxi on Ipswich Street, WBCN [website]’s former headquarters, the McDonald’s on Boylston Street and a parking lot behind CVS. This faction wanted Henry to capitalize on those parcels by building up to whatever the zoning allows....

"When Linda arrived, she woke John Henry up to the fact that Janet has a conflict of interest and that the team is not maximizing its value on properties it owns,” a source said. “So they ditched her and they’re trying to make it look like Janet’s departure was mutual, but it wasn’t.”

On the details of her departure, Smith said last week, “I can’t say anything about that.”

Henry and Pizzuti did not respond to requests for interviews. (story courtesy of BostonHerald.com)

BAHAHAHAHAHAHAHAHA!!!!!!!!  This story is so goddamn funny I almost can't talk about it.  Now it's confirmed that not only is John Henry the creepiest-looking guy on the planet, but he's also completely pussy whipped.  And his pussy-whipped-ness has created a rift in the Red Sox organization over some chick that got fired and whether or not they are doing the most to maximize the area they own around the stadium.

Their team is in the midst of battling for a wild card spot after they all collectively shit the bed at the same time and watched the Pinstripe Express go steaming by them; they have a team comprised of mostly catchers and first basemen; David Ortiz is practically a rotting corpse; their rotation consists of Tim Wakefield and his old-man back, the human batting cage pitching machine that is Josh Beckett, and Paul Byrd, PAUL FUCKING BYRD!!!!  And despite all this, what is everybody in upper management talking about?  Whether firing Janet Marie Smith was on the up-and-up or whether it wasn't.  Everyone is picking sides like the 2 gangs in the "Beat It" video while the team continues to fall back into the clutches of the Texas Rangers.

If this story isn't proof that the Red Sox run is over, then I don't know what is.  It's like the only people in the whole organization who care about winning baseball games are Don Orsillo and Jerry Remy.  Theo hasn't been heard from in months; presumably he's sitting on his racecar bed crying about the shitty contracts he gave J.D. Drew and Jason Varitek.  And Terry Francona has pretty much let everybody know where he stands as he pulls all his starters out of games at the first sign of an impending blowout.

"Don't worry about winning this one, boys.  We're still 2 games up in the Wild Card standings and we won the World Series in 2004.  Everything will be fine.  Somebody get me some more gum."

Shit like this story leaking out would never happen in New York.  Hank and Hal would have had Janet Smith on a boat to Singapore in the middle of the night 3 weeks before she was even fired and would castrate anybody who even thought about mentioning anything related to her firing to the papers.  That's because the only thing the Yankees care about is winning.  Even if they did care what happened to the area surrounding their new stadium, they wouldn't let it become a big-time story in the New York Post quoting unnamed sources within the organization.

Let's all just admit that the whole "Red Sox Nation" was cute for a few years after they won in 2004, but that time has come and gone.  This story shows that Henry, Lucchino, and the rest of the Red Sox organization is just as fraudulent as their fanbase.  They've gotten so caught up in continuing to capitalize on their recent success that they've totally neglected trying to continue that success and now not only have the Yankees passed them by, but they might not even make the playoffs.

Thank you, John Henry.  Thank you for marrying this chick.  Somebody better run a background check on her and make sure she isn't some mail-order bride hired by the Yankees to destroy Boston.
Posted by Unknown at 7:06 PM No comments: