"I am coming back.  Write it down in big letters.  I'm not going out like this."

"I love to play the game.  To me, going out like this isn't the right way."

About damn time we had some good news on a Friday.
Posted by Unknown at 4:13 PM No comments:

I still can't shake myself out of the funk that the Mo injury has put me in.  I've got nothing even remotely witty to say.  Onto the links.

- On Monday, Robbie Clark of Yanks Go Yard collected the best bits from the dynamic duo of John Sterling and Suzyn Waldman in the month of April for our comedic pleasure.  I know I don't have to say it, but you just can't predict baseball, Suzyn!

- William Juliano of The Captain's Blog disproved the theory that the Yankee offense has been poor to start the season with the greatest enemy to dumb theories, statistics.

- On Tuesday, Sensei John Kreese of NoMaas took a look inside Joe's mysterious dugout binder.  Couple of interesting tidbits in there.

- Brandon C. of Pinstripe Alley made a plea to the Yankees to call up Dewayne Wise, a move that I would fully support.  I bet Brandon was re-thinking his "I have no problem with Nunez playing the field" line after watching Eduardo's botch on Tuesday night.

- On Wednesday, Tamar Chalker of IIATMS offered his take on Andy Pettitte's rough day of testimony in the Clemens case.  Definitely worth checking out to get a perspective from somebody in the legal world.

- Matt B of Yankees Fans Unite got an interview with Wallace Matthews of ESPN.  I myself am not a huge fan of Matthews, but if you are then you should definitely check this out.

- Alex Geshwind of TYA examined the numbers after Hiroki Kuroda's first handful of Yankee starts and found signs of regression.

- Greg Corcoran of Bronx Baseball Daily breaks down the surprisingly deep High-A Tampa rotation.  This gives me another opportunity to remind everybody that I picked Nik Turley as the big sleeper prospect for this season.

- On Thursday, Jamie Insalaco of Bomber Banter voiced his displeasure with Joe's decision to let Nova start the 7th inning on Wednesday night.  Glad Jamie ranted on this so that I didn't have to.

- Mike Axisa of RAB, obviously inspired by my Robbie Cano post on Tuesday, looks into Cano's startling GB rates to start this season.  Already covered it, Mike.  Try to keep up.

- It's heart-breaking to watch, but here's the video of Mo talking to the media after the ACL tear was diagnosed last night.  I'm still a little bit in shock about this whole thing, which makes this even tougher to watch.  Shit was getting a little misty around here, no joke.

On Friday, it was obviously all about Mo.  Mike Axisa had a heartfelt piece that certainly spoke to how I was feeling last night and am still feeling today, and I imagine it spoke to similar feelings for many Yankee fans.

- Hank Waddles of Bronx Banter shared his thoughts at the end of his recap of last night's events.

- Alex Belth followed that up with his own personal reaction.

- Chad Jennings of LoHud had a collection of player and manager reactions.  I know they're all professionals and have to put the tough face on, but even reading the words you can sense how down everybody is as a result of what happened.

- Steve Goldman of Pinstriped Bible attempted to inject some optimism in the situation by pointing out Rivera's decreased usage rate over the past few seasons and how there is only a small fraction of innings that need to be picked up by the rest of the guys in the 'pen.

- Jane Heller of Confessions of A She-Fan couldn't even bring herself to discuss last night's game or the events that caused the injury.  Right there with ya, Jane.  I felt sick writing up my game recap.

- Even the new Barstool NY Yankee writer, Strasser, wrote a touching piece on Mo and how much he means to the game of baseball and the world outside of baseball with the kind of person he is.

"Enter Sandman."  Because I don't want to give up hope that I'll never hear it play in The Stadium again.

Enjoy your weekends, everybody.
Posted by Unknown at 1:42 PM No comments: 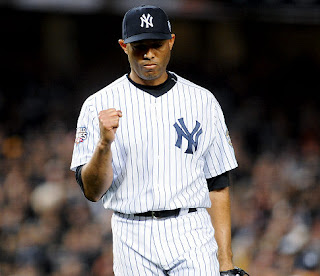 (Courtesy of The Daily News)﻿

By now, everybody probably knows this, but the diagnosis on Mo's injury from last night is in and it's the worst-case scenario many of us feared when we first saw the video.  Mo has a torn ACL in his right knee, as well as damage to his meniscus, and all signs point to him being out for the rest of the 2012 season.

To be quite honest, I'm still a bit in shock over this and don't really know what to say.  I've watched the video of Mo speaking to the media after last night's game and it still doesn't seem real to me.  As I said to my fellow TYA writers in our email discussion this morning, Mo is one of the few genuinely good people left in sports today, one of the best people.  If there's anybody you could point to and say that he didn't deserve this, it's Mo.
Posted by Unknown at 6:47 AM No comments: 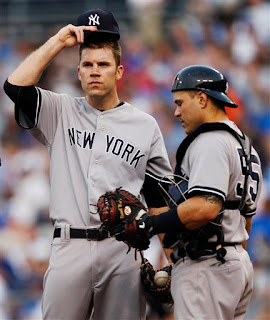 Freddy Garcia's spot in the rotation is dead.  Long live Freddy's rotation spot.  Taking that spot was David Phelps, and last night was Phelps' first career Major League start.  As if making your Major League debut wasn't stressful enough, Phelps had his family in the house and was facing a lineup with plenty of good young hitters in Kansas City.  About the only thing that made it less stressful was the game taking place in KC and not The Stadium.

- It goes without saying that everything that happened in the game last night took a backseat to the shocking injury that befell Mariano Rivera during BP.  Just an incredible amount of terrible luck to suffer an injury doing something that he's probably done tens, if not hundreds, of times during his career.

- Baseball was still played, and Phelps was game in his first start.  He threw a lot of strikes, attacked hitters, and exhibited solid control of his stuff as he generated 5 strikeouts to 0 walks through 4 innings.  His problem was that he missed his spots in the zone a little too often and it cost him a few runs.

- Phelps was done after 4 because of the 85 pitches he threw, and he left down 2-1, but all things considered I would say it was a pretty good first start.  He kept the Yankees in the game and they had a chance to win when he left.

- The Yankee offense showed more life than it had in the previous 2 games, putting 7 baserunners on in the first 5 innings.  But struggles with RISP (1-6 through 5) kept them a run behind in the game.  The lone early run came on a pair of doubles by Derek Jeter and Mark Teixeira.

- Clay Rapada and D.J. Mitchell had a rough go in the 5th trying to pick up Phelps, and allowed 2 more runs, but the bullpen was generally good again on a night where they were asked to carry more of the load than usual.

- The Yankee offense continued to chip away, led by Jeter's 4 hits.  They scratched a run across in the 6th on a pair of singles and a sac fly from Eduardo Nunez, and then another in the 7th on the same method, with the sac fly coming from Teix.

- It looked like things were set up for a comeback in the 9th after a leadoff single from Jeter and a walk to C-Grand, but Teix grounded a 1-1 fastball into a double play to end the major threat, and A-Rod grounded out with Jeter on third to end it.