With the regular season still just three weeks old, offensive sample sizes are still too small to draw any meaningful conclusions.  For a player like Robinson Cano, we can safely assume that his hot start isn't due to BABIP luck and that he'll continue to rake moving forward, but for guys like Lyle Overbay, Francisco Cervelli, and Vernon Wells those assumptions aren't as concrete.  Their tripleslashs right now paint a positive picture, but a more accurate representation of how good they've been can be found in their early contact rates.  Regardless of sample size, contact rates tell the real, simple story of just how well a player is swinging the bat at any given time, regardless of whether those swings result in hits and RBI.  What do the contact rates for some of the Yankee hitters through the first three weeks of the season tell us about them?  Good question.

Michael Pineda's journey back from serious shoulder surgery reached another big milestone yesterday when he threw his first simulated game at the team's MiL complex in Tampa.  Pineda has been throwing BP sessions for a few weeks now, and is slowly working his complete pitch repertoire back into the mix, but yesterday was the first time that he threw in a real serious game-type situation.

Both Bryan Hoch and Chad Jennings had the details on the session and they all sound positive.  Joe was in attendance and said he was, "happy with what I saw," calling Pineda's performance "pretty good" for a first sim game.  Pineda reportedly threw his fastball, changeup, and slider during the outing and while there was no radar gun on him (as there shouldn't be yet) the consensus seemed to be that he threw the ball very well.

There's still a ways to go and Pineda's rehab countdown still hasn't started, so he's got plenty of time to continue to work at the pace deemed best by the team.  But this does represent another important step forward for Pineda, who could become a key mid-season addition if the back end of the rotation continues to struggle.
Posted by Unknown at 10:20 AM No comments: 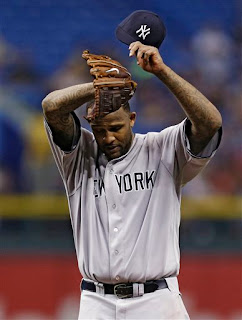