That just plain sucked.  Like watching Games 2, 3, and 4 all over again.

I'll be back to recap this abortion of a game and a series tomorrow.  For now I'm going to go puke and then go to bed.  Seems like the only logical things to do after that "lay down and die" performance tonight.
Posted by Unknown at 10:17 PM No comments:

In Game 2, the 2 starting pitchers were like night and day in the way their games panned out.  Phil Hughes had great stuff but questionable command, which he lost early in the 3rd inning after not being able to get strikes on the corners with his fastball.  Colby Lewis' stuff wasn't that great, as evidenced by the Yanks making a lot of solid contact on him in the early innings, but his command was solid.  He developed a better feel for his off-speed stuff through the 3rd and 6th innings and threw a lot of strikes, keeping the Yankee hitters at bay as he worked aggressively with a lead.  But the Yankee hitters have seen him now, so he won't be able to come with the same approach as he did in Game 2.  And Hughes needs to have better command of his fastball tonight and needs to mix up his pitches as the Rangers were sitting on the fastball and cutter by the time the 3rd inning came around last time.  Whichever guy can make the necessary adjustments should finish with a better stat line and give his team a better chance to win.

2) Who Steps Up to Help Cano & Curtis

The Yankee offense had been pretty much nothing but the "Robbie Cano, Don'tcha Know Show" through 4 games with a few guest appearances by Curtis Granderson.  That changed in Game 5 as everybody reached base except Brett Gardner, 6 different guys got hits, 6 different guys scored runs, 5 different guys drove in runs, and the Yanks drew a series-high 6 walks.  And in the middle of it all, Cano cranked another home run and C-Grand went 3-4 with a 2B, HR, and 2 RBIs.  All of these guys saw Lewis in Game 2 except Thames, and they put plenty of good swings on him, so who's going to keep the offensive streak going?  An answer that includes multiple names would be the best thing to help get a win.

After getting burned in Games 2, 3, and 4 by trusting his binder and watching Boone Logan, D-Rob, Mitre, and Joba take turns throwing BP to the Ranger lineup, Joe finally decided to not fuck around in Game 5 and went right to his bread and butter after CC got through 6 innings.  And Kerry Wood and Mo responded with 3 shutout innings.  With a day of rest between then and tonight, you have to think both of them will be available for 2 innings each if needed, and Joe also has CC on deck to throw an inning or 2 as well.  I expect he will be the first out of the 'pen if Hughes falls apart early or runs into trouble in the 5th or 6th inning.  After that I expect Joe to ride Wood and Mo again if the Yanks are ahead and we probably won't see any of the other guys unless the game goes to extra innings.  No sense in matching up and playing the numbers tonight if you're Joe; you're still facing elimination and if you're going to go down, it might as well be with your best on the mound.

Phil is going to be on a short leash tonight with the series and season on the line and all hands on deck in the 'pen.  He was rattled by a lack of outside corner strike calls in Game 2 and that seemed to cause him to fall more in love with his fastball.  Back on regular rest, Phil should be better tonight than he was earlier, but pay attention to his command and the strike zone he gets early.  If he's falling behind to a lot of hitters and going back to the fastball, he'll get into trouble.  And if he gets into trouble, it won't be a long night for him.  Tonight it's important that he mix in some curveballs and changeups early to keep Texas honest, even if they aren't strikes.  The more they have to think about in the batters box, the less likely they are to hone in on the fastball.


We said the series came down to 3 1-game series for the Yanks after they fell behind and they had to take it one game at a time.  They did that the other night and forced the series back to Texas.  Yes, the Rangers have Cliff Lee ready for Game 7, but Cliff Lee or not, anything can happen in a Game 7, and they certainly don't want the "choke" talks to start up if they lose tonight.  You have to say the pressure is now back on the inexperienced shoulders of the Rangers tonight as they head out with their 3rd-best pitcher on the mound.  We'll see if they can handle that pressure.

Posted by Unknown at 3:18 PM No comments: 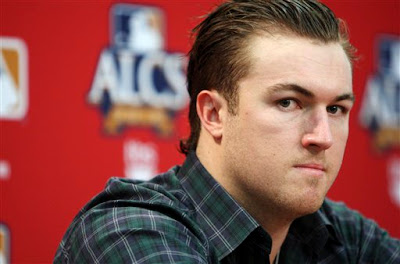 (Photo courtesy of The AP)
... Doesn't Phil Hughes look like clean-shaven Mac from "It's Always Sunny In Philadelphia" in this picture?

Doesn't he?  I can't be the only person who thinks this.
Posted by Unknown at 1:44 PM No comments: