Market Heating Up For Hughes (Updated)

It's been deathly silent on the Phil Hughes market for at least a week now, but things are finally heating up in the final hours before the deadline.

Bob Nightengale first reported that the Yankees had started receiving offers for Hughes a little while ago.  Chris Cotillo has followed up on that by reporting that 2 offers are in already and the Yankees are working to make a move.  There's only a few hours left before the deadline, so if something happens it'll have to come together very quickly.  More on this story as it develops.

** UPDATE 2:43 PM- Joel Sherman reporting that the Braves talked to the Yankees about Hughes but a deal is unlikely in these final minutes. **

** UPDATE 3:17 PM- That's it.  Nothing.  No moves for Hughes or Michael Young, who was also a hot rumored name in the final few hours.  Yankees will stand pat with Soriano and their returning players.  Cash scheduled to address the media in a few minutes.  **
Posted by Unknown at 1:47 PM 1 comment:

All Quiet On The Trade Front

We're now just a handful of hours away from the non-waiver trade deadline, and as of the time I started writing this post the Yankees remain largely inactive.  They were loosely connected to most of the top available hitters yesterday but really nothing more than checking in on availability.  Since the Alfonso Soriano trade last week they've been incredibly quiet, both as potential sellers and buyers, which brings up the question of what exactly are they trying to do?

Per the ownership-implemented 2014 payroll plan and the questionable way in which they've gone about making moves to plan for it, the Yankees have straddled the line of contender and rebuild candidate all season long.  They're 8 games out in the loss column in the AL east and 3 out in the Wild Card race with a -9 run differential, and as presently constructed don't look all that capable of making a postseason run this year or next year.  One way or another, more activity at the deadline rather than less would have been a good way to push the team into some direction for the future.

And here they are, approaching the deadline with almost nothing going on.  After selling the fanbase on their commitment to a championship-caliber team, the front office appears content to just stand pat, wait for guys like C-Grand and maybe A-Rod to return, and hold their present course for better or worse.  With the markets for Hughes and Joba drying up, it's hard to hammer them for doing so, but the lack of activity now paired with the earlier addition of 2014 payroll for guys like Soriano, Ichiro, and Vernon Wells puts the club in the same "no man's land" position next year that they're in now.  It's all very confusing and it's adding up to a 2014 season that'll be even more frustrating than this one.
Posted by Unknown at 11:02 AM No comments: 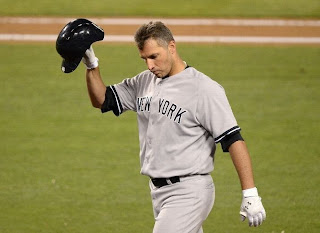