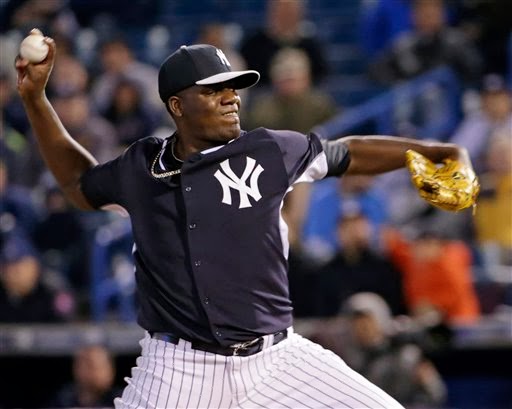 I don't think it's 100% accurate to call Pineda the early leader in the 5th starter competition even after his impressive season debut outing last night.  He is a week or so behind the other 3 pitchers and has made 1 less appearance because of that.  But looking at what the other 3 have done in their 2 starts, 1 of which was against a college team for Nuno, I don't think any of them have done anything special to separate themselves from the pack either.  Phelps and Warren have been hittable in their 2 appearances, and none of the other 3 guys have pitched to much length in their starts.  For having the advantage of the week head start, nobody is really that far ahead of Pineda when it comes to game action.

With Pineda in action now and looking very good with his fastball, slider, and command, everybody else has to step up to keep this competition interesting.  If Pineda continues to pitch like he did last night, he's going to win the spot.
Posted by Unknown at 1:02 PM No comments:

- The Yanks won an unbroadcasted night game 3-2 last night behind 2.2 innings of 1-hit, shutout ball from Hiroki Kuroda.  He also struck out 5.  Derek Jeter went 2-2 with a BB and Carlos Beltran hit his 2nd HR of the spring.

- The real story was Michael Pineda, who made his first game appearance since ST 2012.  He pitched 2 innings, gave up 1 hit, no runs or walks, and struck out 4, including Miguel Cabrera.  His fastball was sitting low 90s and his slider was really sharp according to Brian McCann.  About as good a first appearance as you could ask for.

- Brendan Ryan has an oblique injury and is going to be shut down for about a week.  Jose Ramirez is still recovering from his with no timetable for his return.