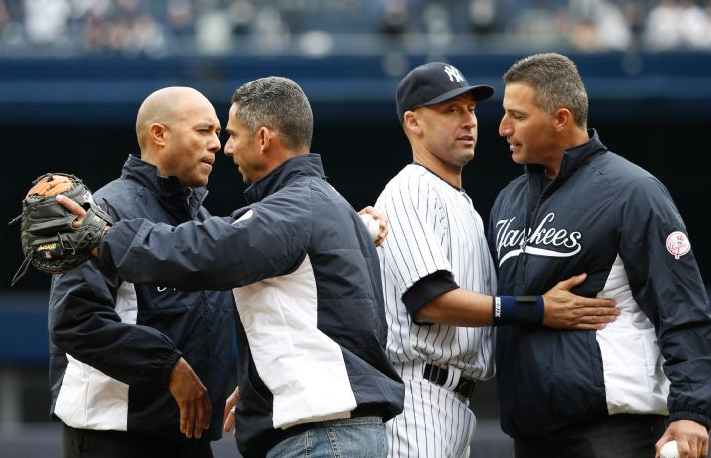 (Just a few rings out there... Courtesy of the AP)

It was a strange season-opening schedule for the Yankees.  They started off on the road in Houston, then bounced to Toronto for a 3-gamer before heading back to The Stadium for their home opener today.  It got even stranger when they had to win yesterday just to salvage a .500 record in those first 2 series, but that will happen when you don't hit much.  A dose of home cooking, an Opening Day atmosphere in The Stadium, and Hiroki Kuroda on the mound should have been a recipe for some more runs and a W.  In the end, it was just enough.

- The Yankees created plenty of opportunities with their patience against a shaky Ubaldo Jimenez early.  They had 2 on, 1 out in the bottom of the 2nd and runners on the corners with no outs in the 3rd, but only managed to push 1 run across on a Jeter GIDP.

- Kuroda looked sharp in his first 3 innings, but he did cough up the lead in the top of the 4th on a pair of well-placed singles up the middle to beat the shift.  Kudos to the O's hitters for hitting 'em where the Yankee infielders weren't.

- The lineup struck back immediately to regain the lead, continuing to stay patient and making Jimenez work.  A 2-out walk and a Yangervis Solarte single in the 4th plated 1 run.  A flurry of hits and walks (including a Jeter leadoff double) led to 2 more runs and the end of Jimenez's day in the 5th.

- As the Yanks grew the lead, Kuroda settled in.  At least until the 7th.  Just like CC yesterday, Hirok ran into trouble in his last inning of work.  A Chris Davis leadoff double and a pair of singles made it a 4-2 game and ended Hirok's day.

- D-Rob was unavailable for the 9th today, for what we now know to be injury-related reasons, so it was an "all hands on deck" audition for the rest of the crew.  Matt Thornton and David Phelps escaped Kuroda's jam in the 7th, Adam Warren worked around a leadoff walk with 2 Ks in the 8th, and Shawn Kelley handled a 1-2-3 9th for the save.

D-Rob To The DL With A Groin Strain (UPDATED)

Guess this explains why he wasn't available for today's game.  Joe told reporters after the Yankees' win today that David Robertson will be going on the 15-day DL with Grade I groin strain.  Apparently he hurt himself some time during his appearance in yesterday's game.

No word yet on how long they expect him to be out, but it could take longer than 15 days.  Groin strains can be tricky.  D-Rob said he was confident that's all he would need.  Also no word from Joe on who will be called up to take Robertson's place on the active roster, although Joel Sherman says it will be either Cesar Cabral or Shane Greene.  For now, Shawn Kelley becomes the interim closer.  Wouldn't shock me to see Adam Warren become the new setup man based on how good he's looked so far.  More on this story as it comes out...

Posted by Unknown at 4:55 PM No comments:

What Is Up With David Phelps? 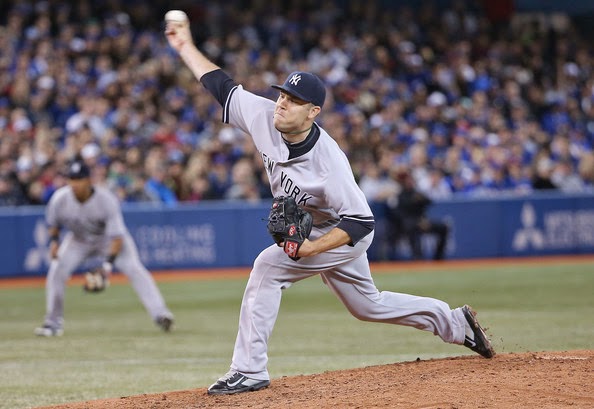 When Joe made his selections for the Opening Day roster, I expected nothing but good things for David Phelps.  Even though he didn't beat out Michael Pineda for the final rotation spot, he entered the season as one of the more experienced pitchers in the bullpen.  With all the changes in that group and the middle relief hierarchy in front of D-Rob unsettled, I thought this was going to be the year that Phelps established himself as a key part of the bullpen going forward.

Yanks Running Wild To Make Up For Early Lack Of Power

It took about 5 and a half games for the Yankees to hit their first home run of the 2014 season.  Naturally, that home run came from Brett Gardner yesterday and not one of the power hitters in the middle of the lineup.  For the most part, those players have gotten off to slow starts at the dish and it's guys like Gardner, Jacoby Ellsbury, and Yangervis Solarte who have carried the offensive load in their place.

The lone HR puts the Yankees 29th in MLB in that department, ahead of only the Royals, the last homer-less team in baseball.  While that level of power production won't cut it long-term and there's no reason to expect that it will continue on this slow path, the impact of the outage has been lessened somewhat by what the Yanks have done on the basepaths.  Their 8 stolen bases ties them for the most in MLB with the Dodgers, a position that's very unfamiliar for the traditionally powerful and patient Yankee offense.  Gardner and Brian Roberts each have 2, Ellsbury has 3, and as a team the Yankees have yet to be caught stealing once.

The expectation was that the addition of Ellsbury and Roberts would add more speed and balance to the lineup and so far that's exactly what has happened.  Once the middle of the order starts picking up their end, the offense could be good enough to get by even without Teix. 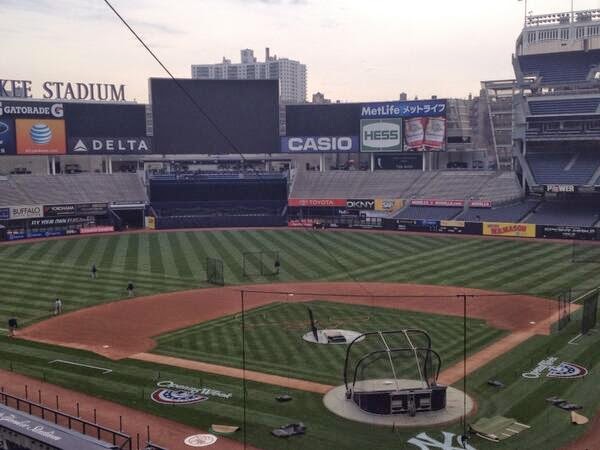 The field looks great, the weather looks like it's going to be good enough to get the game in, and the Yanks wake up this morning winners of 3 of their last 4.  It's a near perfect setup for the 2014 home opener and the Yankees will welcome AL East rival Baltimore to town for the festivities.

Hiroki Kuroda gets the ball today for his first home start of the season, and newbies like Ellsbury, Beltran, and McCann will get their first taste of the Yankee Stadium home crowd.  I expect loud cheers and ovations for all 3 of them, although they'll all be dwarfed in comparison to the cheers that Derek Jeter will receive in his final Yankee Stadium home opener.  And don't forget about that big Core Four first pitch ceremony.  That'll be a helluva photo op.

Yes sir, it's shaping up to be a great day at The Stadium.  Let's go Yankees!
Posted by Unknown at 8:30 AM No comments: