I just strained my oblique. 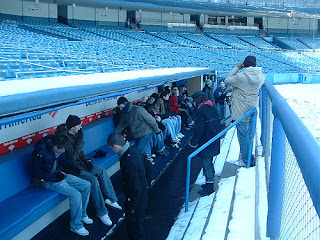 (Enjoy it, people.  That's the only time your butts will ever sit there.)

What We Know: His catching days appear to be over.

Even with the injury to Cervelli, Jorge's name has not come up as a potential backup/emergency catcher candidate.  The team has finally recognized what most of us already knew, that being that Jorge is old as hell and shouldn't be behind the plate anymore.  Technically he's not a bench player, but I included him here just to even things out.

What We Don't Know: Will the lack of catching actually help him?

Logic would dictate that less wear and tear on his old body would leave Jorge in better physical condition, and that better physical condition would lead to better offensive numbers.  But maybe Jorge is just an old guy and his body isn't standing up to aging as well as other players.  There could still be bumps and bruises and 15-day DL stints this year even if he isn't getting beaten up behind the plate.

Diminished speed and all, Jones can still provide adequate to above-average defense at all 3 outfield spots.  And he can still make you pay if you try to sneak a fastball by him up in the zone.  On paper, he's a rich man's Marcus Thames.

What We Don't Know: How much will he play?

Like Thames, Jones is here to play against lefties when the matchup doesn't favor C-Grand or Gardner.  But both of those guys have shown enough against lefties to warrant them staying in the lineup even when David Price or Jon Lester is on the hill.  If that trend continues this season, how are the Yankees going to get Jones at-bats?  And will that number of at-bats be enough to keep his swing going well?

What We Know: No backup IF candidate has played better than him in Spring Training.

Looks like that offseason spent working out with Cano has paid off.  Nunez has swung the bat well, run the bases well, and more than held his own in the field.  He is probably the most complete option for a backup infield role out of the pool of candidates.

What We Don't Know: What does Joe think of him?

The organization is high on Nunez, since they have kept him out of a couple potential trades, but does Joe share that sentiment?  He's traditionally a loyalty-type manager, and he's more familiar with Ramiro Pena than Nunez.  Will that loyalty blind him from seeing the fact that Nunez is the better all-around player?

What We Don't Know: What will happen to him if he doesn't make the team.

Pena seems like he's reached the ceiling of his career.  He's an all-field, no-hit shortstop whose existence as a liability at the plate almost negates the positive value his defense brings to the table.  And his miserable hitting performance in ST has done nothing to change that assessment.  So if he doesn't make the 25-man, he basically falls back into a life of Triple-A purgatory, always somebody in the 26-30-man range who only gets called up when the injury bug hits bad.

What We Know: The backup catching job is all but his.

Cervelli is still hurt, Romine clearly isn't ready to make the jump from Double-A to the Majors, and Jorge isn't being considered.  The future is now for Jesus, who has every opportunity to show why he is such a highly-regarded prospect and lay the groundwork for a long and prosperous future as the anchor to the Yankee lineup.

What We Don't Know: How good/bad he actually is behind the plate.

The climate has shifted constantly on this topic since ST started.  We get a few good reports about his work and in-game performance and then a few talking about how slow and uncoordinated he is.  At this point, that shouldn't matter because he is so young and it's always been his bat that has been his calling card.  But once he has to play some games behind the plate in the regular season, the picture will start to become more clear about where his future in the field lies.

What We Know: Dude has terrible luck.

Every year he gets hurt in Spring Training.  You can't help but feel bad for him, even if he is just a marginal backup player.

What We Don't Know: If he'll ever play another game as a Yankee.

If Russell Martin stays healthy and regains some of his form, and if Montero shows enough skill to warrant staying on the 25-man roster all year, it's going to be next to impossible for Frankie to ever see the field again.  He just isn't as good as those 2, even at his best.  Hopefully he's got his voodoo dolls done and he's contacting the spirits, because an injury to one of those 2 might be the only we he wears the pinstripes again.
Posted by Unknown at 12:47 PM No comments: