Nuno Could Be Headed To The DL

Speaking to the media before this afternoon's game, Joe Girardi confirmed it was a groin injury that caused Vidal Nuno to leave his Triple-A start in the 2nd inning last night.  There has been no official diagnosis of the injury yet, but it sounds very likely that Nuno will have to go on the disabled list.

This is another small ding the Yankees' have taken to the starting depth in the last 24 hours.  They lost Chien-Ming Wang yesterday to a Major League deal with the Toronto Blue Jays and now could lose Nuno to a significant chunk of time.  Ivan Nova now assumes the 6th starter role for the Major League club while Michael Pineda starts his rehab assignment tonight.
Posted by Unknown at 2:28 PM No comments:

Jagielo's Right About His Opportunity, And Not For The Reason You Think

The Yankees' 2013 1st round draft picks held a conference call with the media yesterday, and while almost every beat writer tripped over himself and each other trying to keep the "Ian Clarkin doesn't like the Yankees" theme going, I found what Eric Jagielo had to say much more newsworthy:

“I definitely see an opportunity.  That was the biggest thing, hoping I would be drafted by some team that I can see myself in the future at the big-league level at third base. With everything I've read, there’s not much (standing in the way)."

That may sound cocky to some, and maybe it is to a certain degree.  It's also 100% right and it's exactly what I want to hear Jagielo saying.  And no, it has nothing to do with Alex Rodriguez, another idiotic non-story that the MSM beat into the ground on Thursday night. 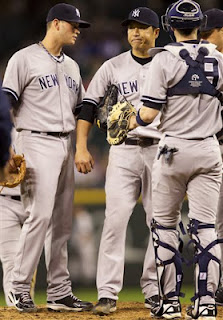