Last Friday, the Yankees were in the midst of another offensive slump, a slump that had them sitting at 1-5 in their last 6 games with only 16 runs scored.  This latest slump was extra frustrating due to it coming after Alfonso Soriano, Curtis Granderson, and Alex Rodriguez has been added to the lineup and provided next to no offensive spark.  Since then, things have turned around in a big way:

These 3 have combined for 7 HR in New York's last 6 games, and not coincidentally the Yankees have gone 5-1 in those 6 games with 39 runs scored.  For the first time since late April-early May, the lineup looks competent, competitive, and downright dangerous.  Amazing what happens when the middle of the batting order starts producing, ain't it?
Posted by Unknown at 11:00 AM No comments:

Mark Montgomery Back To The DL 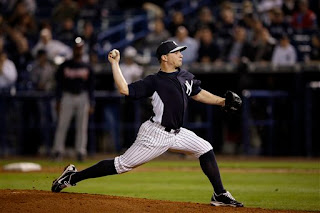 At the end of last season, Mark Montgomery was the hands down top relief prospect in the Yankee system, a borderline top 10 organizational prospect overall, and on his way to breaking into the Major League bullpen sometime around now if not earlier.  After leaving his last appearance on Saturday with more shoulder problems, he's likely done for the year and has become a much bigger question mark for next season rather than a possible bullpen answer. 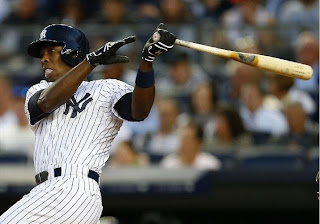 I had honestly forgotten what these games feel like.  The games where you stop paying attention and go to bed early because you know the team is going to win.  The Yankees have now rattled off 2 of those in a row and 4 wins in a row overall after last night's drubbing of Jered Weaver and the Angels.  Weaver had been pitching really well lately, something that normally doesn't bode well for the Yankees.  They slapped him around silly last night, and for all intents and purposes this game was over after the 1st inning.  If you don't already know, spoiler alert, it was another Alfonso Soriano show.

- With 2 outs in the bottom of the 1st, the Yanks loaded the bases on a Robinson Cano single, Alex Rodriguez double, and Curtis Granderson walk.  Soriano strode to the plate and smacked an 0-1 fastball out to center for a grand slam and an immediate 4-0 cushion for Ivan Nova.

- Nova needed that cushion last night.  His fastball command wasn't what it's been and he kept leaving it in good spots in the hitting zone.  After a 1-2-3 1st, Nova gave up 2 runs on 3 singles and a HBP in the 3rd and another on 3 more singles in the 5th.

- The offense gave Nova all the insurance he would need in the bottom of the 2nd.  They got things started with 2 outs again and eventually plated 4 runs, the big hit a 2-run Soriano double.

- Just to add insult to injury, the Yankees tacked on 2 more runs in the 7th on a Chris Stewart 2-run single.  When TCS is dropping 2-out ribbie hits on you, you know it just ain't your day.

- Nova was sharper in his final 2 innings of work, holding the Angels at 3 and working into the 8th.  Preston Claiborne relieved him and took the game home to give the bullpen aces another day of rest.