AB4AR would like to be the first to congratulate Kei Igawa for setting the Scranton/Wilkes-Barre Yankee all-time record for more innings pitched and most home runs allowed.  These records are a testament to Igawa's pedestrian stuff and dedication to being mediocre that have allowed him to be a constant staple of the Triple-A roster over the years.

So congrats, Kei.  I hope your teammates gave you the proper champagne shower in the locker room after the game.  You earned it, buddy.  I think we can now safely say that this was $46 million well spent. 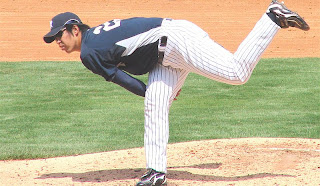 /throws up
Posted by Unknown at 7:14 PM No comments:

What To Do With The Roster?

The injury bug sucks, and it's been biting the Yankees hard over the last week.  The Yankee pitching staff was already hurting without Damaso Marte, Pedro Feliciano, Phil Hughes, and Rafael Soriano in the ranks, and then earlier this week they lost Joba Chamberlain, yesterday they lost Bartolo Colon and Amaury Sanit, and possible Triple-A replacement Tim Norton was also put on the DL earlier in the week.  Now Sanit is probably addition by subtraction, but it's a fair statement to say that the Yankee staff is in tatters right now and they need to get creative to stem the tide.

Coming into yesterday's game, Joe was carrying 13 pitchers, which was a ridiculous move when you consider that those 13 included Sanit, Jeff Marquez, and Lance Pendleton and not Hector Noesi, and even more ridiculous when you consider the fact that it left the Yankees with just 2 non-catcher bench players in Andruw Jones and Eduardo Nunez.  Things have already gotten straightened out a bit today with Noesi and Chris Dickerson being called back up to replace Colon and Sanit on the active roster and add a little more bench depth, but things still need to be figured out.

Noesi is the most likely choice to replace Colon in the rotation, but that isn't 100% certain.  David Phelps has been very good all season, Adam Warren has been great recently, and D.J. Mitchell pitched a pretty good start yesterday and is on the same schedule as Colon, making him the easiest to drop in.  If one of them gets called up to take Colon's spot instead of Noesi, then Noesi gets put back into the 'pen as the long man and somebody else has to go down.  That guy should be Marquez or Pendleton.  And the Yankees definitely don't want to play with fire by only having 2 available bodies on the bench, so Dickerson should stay.

It's a shitty situation to be in right now, but the Yankees have to figure out a way to make it work.  If it were up to me, I'd give Colon's rotation spot to Noesi, even if he can only work a short outing this next time out.  He has the highest ceiling of any of the candidates and has already shown he can get it done at the Major League level in his previous appearances.  I'd also think about strengthening the bullpen by swapping out Marquez and/or Pendleton for George Kontos a/o Ryan Pope from Triple-A.  You'd be upgrading the stuff and velocity of 2 middle relief options whose roles become more important with Joba and Soriano down while still having the option of carrying guys who can go more than 1 inning if needed.  Kevin Whelan was a good start, now it's time to get rid of the rest of the crap in there and at least have some solid arms.