And It Just Gets Worse

- 30 combined pitches seen in 8 at-bats between the 2 goobers mentioned above.

- Eduardo Nunez continued to embarrass himself, his family, and the Yankee organization in the field by committing his 6th error of the season.

- Yankees lose their 6th in a row, the longest winless streak of Joe Girardi's tenure.

On the positive side, C-Grand hit another home run and Joba managed to not give up any home runs to extend the deficit in the 8th inning.  But that's really just grasping at straws right now.
Posted by Unknown at 9:10 PM No comments:

No Worries, Everybody. It's All Good Now

Derek Jeter even said so today after he, Hal, Cash, and Randy Levine had a conference call earlier.

See?  They're all on the same page.  Everything is fine.  We have nothing to worry about.  All the problems have been solved.  Except that Girardi wasn't on the conference call and probably should have been, nobody knows what the conference call was about, Jorge STILL hasn't apologized to his teammates, and Hal and Randy Levine should never be involved with any baseball-related conference call because they don't know shit about baseball! 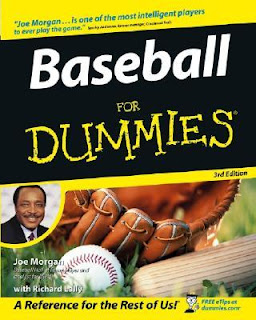 Now seriously.  Cut the crap with all this behind-the-scenes garbage and get back to focusing on fixing the real problem.  That being the horrible play on the field.
Posted by Unknown at 3:32 PM No comments:

I feel like I did a pretty good job of letting my feelings on the matters be known during last night's live blog, and quite frankly, I'm too tired today to muster up some more commentary.  So instead I'll just take a quick lap around the Yankosphere to get everybody else's take.

- Joel Sherman of The Post touches on the Posada issue being only the tip of the iceberg of Yankee problems right now.

- Mike Vacarro has a piece on the "should vs. will" dynamic of a Yankee turnaround.  That's a fair argument to make when you look at the team's age.

- Lisa of Subway Squawkers has a post on everything that was wrong about what Jorge did and why the fans were wrong for cheering him last night.  There wasn't a single word in her whole piece that I didn't completely agree with.

- Brien of IIATMS, on the other hand, wrote about why it was right to cheer for Posada, and while I can see his point, I have to disagree.  You just don't cheer lack of effort and lack of commitment, regardless of past history.

- SJK at NoMaas came up with this very well done photographic summary of the whole Jorge ordeal: 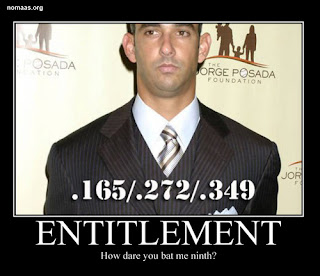 A tip of the cap to you, sir.  And nicely done on the "Jeter GIDP" tracker on the sidebar.

- Not to be outdone, Jimmie Reese at It Is High... had his own fun ragging on Teix for his recent infatuation with popping up in every other at-bat.  I would laugh more at that if it wasn't so pathetic and true.

- Larry Koestler at TYA actually analyzed and wrote about something troubling ON the field, that being The Horse's continued struggles at the plate.  And Larry does a hell of a job looking at this from every possible angle.

- Chad from LoHud quickly touches on the situation the Yankees have gotten themselves into by offering the recent long-term deals to Posada and Jeter.

- And just to top things off, Buster Olney at ESPN is reporting that the Yankees are now mad at Captain Jeter  for his reaction and response to the Jorge debacle.  Good to know this situation is behind us, right?

Maybe later tonight I'll muster up the energy to comment on some of this further.  Or maybe I'll just move on to complaining about how the Yankees got snuffed by David Price.  I guess that's up to the boys and how they decide to play tonight.
Posted by Unknown at 12:34 PM No comments: