Well At Least This Guy Had A Good Time Last Night

Amen, brother!  Get you some of that pork chop.  There definitely wasn't anything going on in the game that was worth watching so why not get all up in Kim Jones' shit and get some nourishment while you're at it?

And can somebody tell Michael Kay to calm the fuck down??  Really, dude with the "Oh that's disgusting!" line?  It's a goddamn pork chop on a stick.  It wasn't like he was chowing down on a deep-fried moose turd.  Kim obviously wasn't going to eat the thing so why let it go to waste?  I'll tell you one thing, if I'm ever at Target Field and Kim Jones is waving a pork chop on a stick in front of my face, I'm chomping down on that thing faster than you can even think.  Might even take some of Kim's hand with it too.

P.S.- I know I'm probably behind with this observation but again, out in Wisconsin, no YES Network, cut me some slack.  But what's the deal with Kim's new hair?  The darker, longer look?  I'm not feeling it at all.  Give me the shorter blonde look that I know and love.
Posted by Unknown at 11:27 AM No comments: 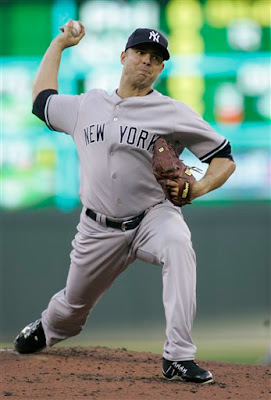 (Photo courtesy of The AP)
That's right, Javy.  I'm talking to you.  How many hard hit balls did you plan on giving up last night?  Even the outs were loud.  Consider yourself lucky that none of those were comebackers to the mound or you might be laying in the ICU this morning.  Throw your buddies Chan Ho and Teix in with you, add a little milk and ice, and it's a full-on smoothie of sucktitude in Yankeeland right now.

15 runs scored in the last 6 games?  What the hell is going on here??  Thank Joe Pesci I'm heading to Baltimore for the weekend to watch some D-1 lacrosse.  Now THOSE GUYS know how to put some points on the board.  Also thank Joe Pesci that the Yanks get their next 6 against the Indians and Orioles and then a series against Houston a bit later.  If that trio of baseball garbage can't get the offense going then I don't know what will.

Welcome back tonight, Curtis.  Hopefully Joe takes my lineup advice and puts you in the 2-spot.
Posted by Unknown at 9:37 AM No comments: