No Time To Panic, Or The Perfect Time?

I don't think I'd rank it up there with Pulp Fiction or A Clockwork Orange on my list of all-time favorite movies, but gun to my head, I don't think there's any way I could come up with a top 10 and leave out Toy Story.  That movie is flat out awesome, and if you don't agree then you have less of a soul than even I.  Arguably the best scene in that movie is the scene shown above in which Woody and Buzz Lightyear, alone and exposed in the outside world for the first time, argue about how best to handle the situation.  Bizarre as it may seem, that scene lends itself well to explaining the predicament in which the Yankees currently find themselves, and whether or not it's time to panic.

In Case You Haven't Had Enough Slump Coverage...

There's these 2 shit-flavored tidbits to hold you over:

This point was talked about multiple times by the ESPN broadcast crew last night, and I think it's very telling to what's gone wrong with this offense lately and all season.  There aren't a lot of grinders in this lineup anymore; there aren't guys who work counts, foul balls off, take walks.  There's a lot of hackers and a lot more swings and misses.  Probably explains why the Yanks have hit so many home runs but likely won't finish with a single 100-RBI guy.

I don't care who you are, what side of the plate you hit from, and how much good or bad BABIP luck you have, that's fucking awful.  Awful.  Mike Axisa pointed this out in his game recap on RAB this morning and I can't think him enough for contributing to my early morning depression.

Posted by Unknown at 9:39 AM No comments: 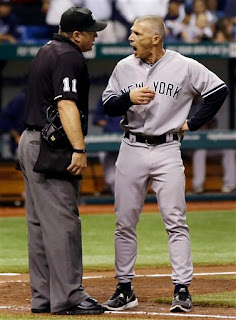