Well that sucks.  Despite saying today that he's "getting better", the Yankees have elected to put Carlos Beltran on the 15-day disabled list with a bone spur in his right elbow.  The plan is to use the DL stint to rest his elbow, see how it responds to that and the cortisone shot he received, and then make a decision on whether to proceed with surgery or not.  Expected recovery time from surgery would be 6-8 weeks.

I'm not one for delaying surgery when it seems like the eventual endgame, but I agree with what the Yanks are doing here.  I don't think they would have wasted time with the cortisone shot if the spur was obviously bad enough to need surgery.  If Beltran feels like he can play after a few weeks off and it looks better to the doctors, I guess it's worth a shot.

Cashman: CC has degenerative changes in knee... Will have cortisone shot with stem cells tomorrow ... No timetable yet #Yankees
— Meredith Marakovits (@M_Marakovits) May 14, 2014

The small bit of good news that came from Dr. James Andrews confirming the initial diagnosis on CC Sabathia's knee of inflammation and fluid was dealt a blow later in the day yesterday when Cash elaborated on the situation to the media.  As I've said before, I'm not a doctor and have never worked a day in the medical field, but the phrase "degenerative changes" being used in relation to the twice surgically-repaired plant knee of a mid-30s MLB pitcher who's spent the entirety of his career pitching at or around 300 pounds cannot be a good thing.  At all.

Sabathia was set to get a cortisone/stem cell injection in his right knee today, and at some point in the next few days he'll have it drained, but this new description of the knee's condition does not give me a warm and fuzzy.  As of right now, I'm counting on him missing more than the minimum 15 days and most likely spending another 15-day stint on the DL for this knee later in the season.

A/Another Chance For A Couple Of Fringe Guys

If there's a silver lining to be had in this recent bout of injury problems, one might say it's the opportunity for the Yankees to call up more of their young players and get a look at what they might have in them.  Nothing makes the "play the kids" decision easier than a lack of healthy bodies, and the Yankees are short more than a couple at the moment.  To deal with that, they've called up outfielder Zoilo Almonte and right-hander Chase Whitley from Triple-A SWB, 2 older, fringe prospects who've spent plenty of time at the highest levels of the farm system.  We're definitely going to see one of them in action tonight and we may not see the other one at all, but each has a chance to carve out a role for himself and possibly earn a more long-term roster spot.

Masahiro Tanaka threw 114 pitches last night, 76 for strikes.  He mostly threw 4-seamers and splitters (57.9%), but mixed in plenty of sliders and sinkers as well.  By now, you know how well he managed throwing those 114 pitches, but look at the location of his offspeed stuff and understand why he was able to be so dominant last night:

That's the splitter plot, sweet MS Paint circle added by me for effect.  Of the 29 splits Tanaka threw last night, only those 3 in the middle of the zone were really good pitches to hit.  Over half of them weren't even in the strike zone and yet Tanaka got 15 swings and 6 whiffs.  That's nasty. 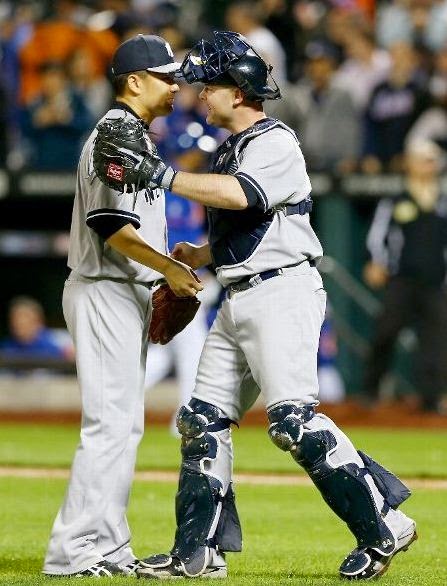