Can we officially call this a winning streak?
Posted by Unknown at 10:19 PM No comments: 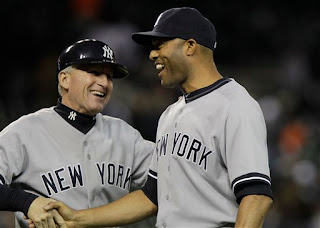 As much as Joe might not want to overwork Joba and D-Rob or as much as he might not completely trust Soriano to get 3 outs in the 8th, he can't always use Mo as their crutch.  The Yankees can't afford to have him miss time in the summer because of strains and sprains accumulated from being overworked.  If Joe doesn't trust the other guys in the 'pen, then moves should be made to get him some better pieces, by they internal promotions or additions through the free agent or trade markets.  Running a 41-year-old Mariano Rivera into the ground is not the right solution.
Posted by Unknown at 12:36 PM No comments: 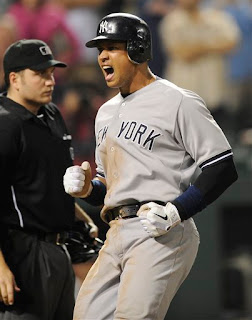 It wasn't pretty, it wasn't easy, and it had to be pretty damn tiring, but it was another win, and that's all that matters.
Posted by Unknown at 7:34 AM No comments: