Umpire Joe West blasted the Yankees and Red Sox just before Wednesday's game, accusing the two clubs of being "pathetic and embarrassing" in dragging the pace of games and refusing to work with umpires.

"They're the two clubs that don't try to pick up the pace," said West, chief of the umpiring crew that worked the three-game series in Boston. He was the home plate umpire Sunday. "They're two of the best teams in baseball. Why are they playing the slowest?"

"It's pathetic and embarrassing. They take too long to play."

"This is embarrassing, a disgrace to baseball." (courtesy of the Bergen Record)


Jeez! Who pissed in Joe West's coffee? So Yankee-Red Sox games take a long time; BFD. Tell me something I don't know. And then shut the fuck up, put your mask back on, and get behind the plate and call a decent game.  And you might want to refrain from referring to the 2 most popular franchises in Major League Baseball as "disgraces" while you're at it.

Newsflash, Joe. There isn't a big public outcry from the fans to get Yankee-Red Sox games done in under 2:30. Everybody acknowledges that they take a long time, but it ain't like people have stopped showing up at Yankee Stadium and Fenway and it ain't like ESPN and FOX have stopped falling all over each other to get as many of these matchups on TV as possible.

And that's because they ARE 2 of the best, if not the best, teams in baseball and their games are almost always exciting. People WANT to watch the Yankees and Red Sox play. It's a guaranteed sell-out and must see TV whether it's in April, June, or October. It's the premiere rivalry in baseball and all of American sports and each team wants to win every time out. That’s why the games take so long. Because each team is constantly trying to make decisions and plays that will help them win the game. Maybe I'm old-fashioned, but I don't think 2 teams doing everything they can do to win a game is pathetic or embarrassing. It's what professional sports are all about. When people stop watching Yanks-Sox and you and your umpires finally call a perfect game, then come back and talk to me about the time being embarrassing or disgraceful.

No one comes to the park to see you, Joe. And nobody cares that you think the games are taking too long. Just shut up, do your job, and go make another crappy country album. And next time you're behind the plate at a Yanks-Sox game, try not to squeeze the strike zone on CC. Fucking game wouldn't take 3 1/2 hours if you'd give the guy the outside corner once in a while.
Posted by Unknown at 11:30 AM No comments: 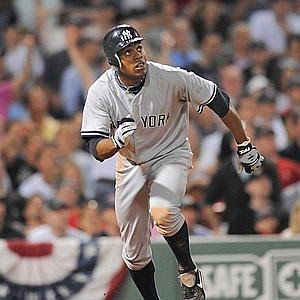 (courtesy AP)
- Another textbook Andy Pettitte start last night. He got himself into and out of trouble with the same regularity you expect after watching him for the last couple years. He used his vast repertoire of pitches at any and all times to shut Boston down after opening the door for them. Perhaps more so than any other Yankee pitcher, you almost never worry when he starts putting guys on base because he always seems to bear down and make pitches to get the next guy out (see: David Ortiz strikeout in the 5th). When A.J. Burnett puts 10 guys on base in 6 innings, I get worried. When Andy does it, I don't even think twice about it.

- I thought it in my head as soon as it happened and I'll say it now: Pettitte hitting Youkilis in the head last night was AWESOME! I don't care if he meant to do it or not, it was sweet. And anybody that didn't see Jeter getting plunked coming or thought it wasn't intentional is an idiot. I had the game on ESPN2 and was forced to listen to Rick Sutcliffe and Nomar go on and on about how it wasn't intentional and there shouldn't have been any warnings. I guess they failed to notice Victor Martinez say something to Pettitte and Pettitte turn around to respond after he walked off the mound in the 5th. Martinez was letting him know that one of the Yanks was going to get it in the following inning, and when Jeter is one of the 3 guys scheduled to bat, it's almost a guarantee that he's getting hit, especially against the Red Sox.

It's part of baseball and everything was clearly even and over after Jeet got hit, but don’t try to say it wasn't intentional.

- It was also just another day at the office for Mo last night. 3 up, 3 down; exit light, enter night, start spreading the news. For a team that supposedly had Mo figured out a few years ago, the Red Sox certainly haven't done much against him lately.

- After last night, you could start thinking about saying the opposite about Jonathan Papelbon. The guy has owned the Yankees historically, but completely fell apart in the 10th last night, giving up the homer to C-Grand and then walking 2 batters to force Francona to lift him from the game. When you're getting pulled for Scott Atchison, you know you had a bad night.

(Guess you're shipping up to the clubhouse now, asshole.- courtesy AP)
And as a side note, if we're going to talk about Joba's diminished fastball, it's only fair to discuss Papelbon's. I remember him consistently living in the 95-96 MPH range with the occasional touch to 97. Last night he was 93-94. Will anybody in the mainstream media (cough, cough, ESPN) mention that about him? Of course not, he wears a Boston uniform. But it's worth mentioning.

- As for Granderson, I could give a shit about how well or how poorly he hits lefties if he keeps coming up with big hits like that and plays solid centerfield.

- "The Grandy-man can?" That's the best you've got for a Granderson home run call, Sterling? Really? Not your best work.

- I think Joe must have been scouring the blogs and listening to some WFAN before the game last night about how he handled the first 2 games as he decided to switch from overmanaging the bullpen to undermanaging. I liked the decision to go back to Park and I liked the decision to let him throw 2 innings in a tie game, but 3 innings?? Park was clearly out of gas in the 9th and the 3 outs he did get were some of the loudest, scariest, most ass-clenching outs I've ever seen. And there wasn't even anybody up in the bullpen!! Make up your mind, Joe.

- Park looked like a completely different guy on the mound last night than the one we saw on Sunday. His fastball was back up in the 92-94 MPH range and his off-speed stuff had its bite and location back. That's what I was talking about on Monday about going out and getting the job done in a clutch spot; that's what the Yankees brought him in to do, that's what they should expect him to do, and last night that's what he did. Maybe all that diarrhea and coughing over the last 2 days helped.

- Mark Teixeira is nothing if not consistent. He's been a slow starter his entire career, was downright awful in April last season, and has coming out of the gates flailing again this year. You can talk all you want about the "productive out" he got last night in driving in the Yankees' 3rd run, but me, I thought it was crap. Bases loaded with your 3-hitter at the plate, you don't want productive outs. You want a 2-run single; you want a bases-clearing double; if you're greedy you want a grand slam. You want that hitter to effectively end the game with one swing. After all, that's why you put him in a run-producing spot in the lineup. And you certainly don't want or expect him to be swinging at the first pitch and rolling it over. Show some goddamn patience, Teix!

Yes he brought in an insurance run, but the fact that it was only one run left the door a tiny crack open for the Sox in the bottom of the 10th. Teix isn't seeing the ball well at all early on, evidenced by his letting good pitches go by and too often swinging at junk early in the count. He's also pulling off the ball. Dude needs to get in the cage today and get his shit figured out between his hands and his hips, because right now they are not on the same page.

- There's also something funny about Jeter's swing right now, like he's a little bit in front of the ball. In the 3 games he was grounding an awful lot of balls to shortstop and not going the other way to right, which is his calling card. His balance might be a tick off at the plate right now too, but given his track record of consistency, it's not something that should be a huge concern.

- Good stat from George King in today's Post: "Last night's victory was the Yankees' 17th straight regular-season win when the score was tied at the end of seven innings. That is the longest win streak in the modern era in games that were tied at the end of the seventh inning, passing the record set by the 1906 Giants."

Clutch, anybody?
Posted by Unknown at 9:00 AM No comments: