Just this morning I said Boston using all of their best bullpen guys last night would come back to bite them and look what happens.  With Crapelbon and The Artist Formerly Known as Billy Wagner unavailable they had to turn to the double-decker crap sandwich of Ramon Ramirez and Manny Delcarmen and watch them choke the game away.

Meanwhile, Phil Hughes is in Baltimore striking people out left and right to close out another Yankee win, what else is new?

When you're right, you're right.  Now the Sox get to sweat out the rest of the regular season after breathing new life into Tampa's lungs.  Have fun with that, fellas.

Start spreading the news...
Posted by Unknown at 9:51 PM No comments: 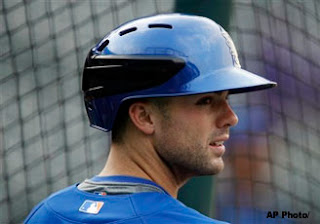 Seriously, what the hell was David Wright thinking with this helmet last night?  He looks like a chemo patient with that thing on.

If you don't want to get hit in the head by a pitch, don't make a bigger target for pitchers to focus on.  He might as well stand right on the plate, face the mound, and start psyching himself up like Happy Gilmore because if you wear that batting helmet you're basically inviting pitchers to buzz your tower again, if for no other reason than to test the ability of the helmet to protect its wearer.

I would rather get hit in the head every time I stepped into the box until I was laid out on the trainer's table drooling and shitting myself than wear this monstrosity.  A Yankee wouldn't be caught dead wearing this thing.
Posted by Unknown at 6:08 PM No comments:

Will the Real AJ Burnett Please Stand Up 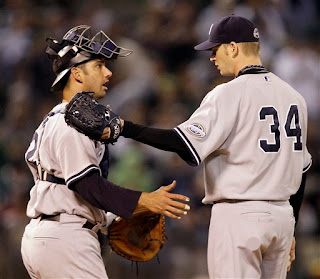 While CC has shown over the last 6 weeks why the Yankees gave him $161 million, AJ Burnett's first season in pinstripes has pretty much been a microcosm of his career: consistently inconsistent with dramatic night-and-day differences between his stats over extended periods of time.

Case in point: Through June and July Burnett was 7-2 with an excellent 2.27 ERA over 10 starts. But since his July 27 start, he is 0-4 with a horrendous 6.53 ERA over 7 starts. These types of dramatic Jekyll and Hyde swings in performance have marked his whole career until he established a bit of consistency over his last 2 years in Toronto. But these latest outings beg the question: Which AJ Burnett is the real AJ Burnett? Is he in the midst of a freak Hyde phase where he's snarling and cursing on the mound and then pouting in the dugout after he gets taken out? Or is this the actual Dr. Jekyll form of Burnett and the flashes of brilliance he has shown this season are just that, flashes and nothing more?

The truth probably lies somewhere in the middle, as a closer look at his numbers shows that through June and July his WHIP, H/9 innings, & BB/9 innings were as follows:

Those same categories since July 27 are:

What those splits tell you is that in June and July Burnett's stuff was electric, but his control not so much. He gave up far fewer hits (less than 1 per inning) but walked more guys. While walks are never a good thing, they are easier to overcome than doubles and home runs. You walk a few guys with 2 outs and you can still get the next guy to escape an inning unscathed. You give up a double, a walk, and a home run with 2 outs and you end up getting out of the inning having allowed 3 runs, assuming you make it out of the inning at all.

Through August and last night's start Burnett has walked fewer batters per 9 innings, but is now getting shelled by hitters at a 1.15 H/inning clip. He isn't inducing as many swings and misses, and the contact being made on his pitches is solid, both indicative of his fastball not having the same zip on it and his off-speed pitches not having the same bite they had earlier. The difference in WHIP over the 2 splits is negligible; it's the fact that lately there has been more "H" than "W."

Jorge Posada being behind the plate is irrelevant. You could put Yogi Berra in his prime back there right now and it wouldn't make much of a difference. The solution to his struggles needs to be worked out by Burnett himself and Dave Eiland. Once again we're watching a Yankee pitcher struggle for an extended period of time without any noticeable difference in his approach to try and overcome the struggle. This comes back to Eiland needing to watch video and try to notice things that are being done differently that could be causing Burnett's problems and then working with him on his off-days to resolve the problems. And like with Joba, Eiland needs to be quicker to head to the mound when these struggles pop up. Burnett's frustration has boiled over in each of his last 2 poor outings and he clearly does not have it within himself to calm down and refocus his attention to pitching.

So which AJ Burnett will we see down the stretch? My guess is it will be a hybrid version of the June-July Burnett and the Burnett of the last month as the law of averages will bring his hits and walks back to homeostasis. While that probably won't be enough to have MLB polish the trophy for the 27th Championship right now, it should be enough to keep the Yankees in the driver seat as the postseason favorite, especially if the bullpen can produce in the postseason the way they did last night.
Posted by Unknown at 1:52 PM No comments:

Really, guys, using Papelbon for 2 innings to maintain your 5-game Wild Card lead knowing you couldn't gain a game on the Yankees for the division?  Really?

I'll take "Panicking in The First Game of A Series Against a Team Who Owns Us Because We're Secretly Concerned About Missing the Playoffs" for 800, Alex.

And you wasted Billy Wagner and Okajima, who was out on the mound doing his best Kei Igawa impression.  Let me know how it works out tonight when Daniel Bard comes in to close the game out and starts giving up bases loaded walks and 3-run doubles.