That'll Do, Ma-kun. That'll Do 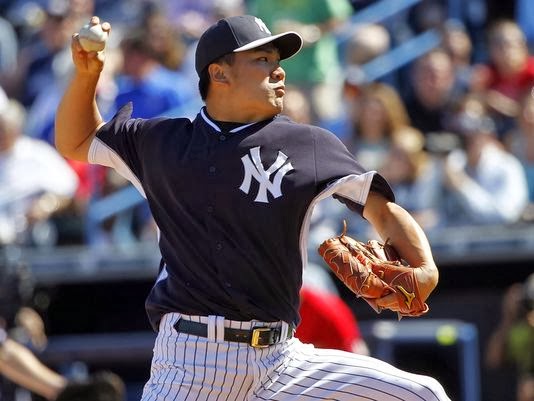 It was the most hyped Yankee debut in some time, and Masahiro Tanaka didn't disappoint.  Entering after CC and Hirok each threw 2 scoreless innings, Tanaka worked a scoreless 5th and 6th.  He allowed a pair of singles, didn't walk anybody, and struck out 3, throwing 31 pitches and hitting 93-94 on the gun with his 4-seamer.  According to some of the beat guys, he was also throwing sliders, curveballs, changeup, and his famed splitter.

Hard to ask for anything better than that.  He looked good, his stuff and command were there, and he came through the outing healthy.  Now it's time to start get excited about his next appearance.
Posted by Unknown at 3:12 PM No comments:

Yanks Showing Off Their Catching Depth

If you've paid any kind of attention to the first few ST lineups, you've noticed the trend that Erik Boland pointed out yesterday.  Not only have the Yankees been playing 2 catchers every game behind the plate, they've used the DH spot for a 3rd one.  Yesterday it was Brian McCann at catcher and Gary Sanchez at DH to start and each of them popped his first HR of the spring.  Today it's Cervelli behind the plate and McCann getting a day at DH.

There's been a lot of talk about the Yankees looking for more infield help on the trade market this week.  From Rickie Weeks and Gordon Beckham to the Arizona Diamondback's stash of young infielders, the Yanks don't appear to be as comfortable with what they have as they've stated publicly.  Arizona actually makes a lot of logical sense as a trade partner, as they are looking to add a young catcher, and the Yankees certainly appear to be putting their crop of catchers on full display for them and all other potentially interested trade partners.

There's no need to rush into a deal for someone, but there's no harm in showcasing what's become the Yankees' greatest strength in terms of trade assets.  Someone from their top group of 5 catchers isn't going to be getting regular playing time when the season starts, so the best way for him to bring value to the team could be as a trade piece.  If this attempt to show off their goods ends up netting the Yankees a better second base option than what they've got right now, that would be a very good thing.

- The latest plan for Pineda is a sim game on Sunday and then a real game sometime next week.  He's the last of the 5th starter competitors to get into a game.

- Jose Ramirez's MRIs came back clean, which is good news, and Slade Heathcott participated in baseball activities for the first time this spring, which is better news.
Posted by Unknown at 7:08 AM No comments: