Do The Yankees Really Need Another Lefty Reliever?

While this offseason has been mostly an inactive one for the Yankees, one thing they have gone after consistently is cheap pitching depth.  From re-signing Freddy Garcia to another team-friendly one-year deal to taking low-risk flyers on guys like Adam Miller, Brad Meyers, and Matt Daley, the Yankees have definitely given themselves plenty of options to choose from when it comes to filling out their Major League and Triple-A pitching staffs for 2012.  Among this smorgasbord of lower-level talent is a collection of left-handed relief pitchers (Cesar Cabral, Mike O'Conner, and Hideki Okajima) from which the Yankees will presumably look to fill the "2nd bullpen lefty" role that was left vacant in 2011 thanks to injuries suffered by the now departed Damaso Marte and the still being paid Pedro Feliciano.  But in looking at how the team, and the bullpen, will likely be constructed in 2012, is a 2nd lefty reliever something the Yankees should even be pursuing?

In quickly constructing the roster, we know there will be the starting 9 (Teix, Bobinson, A-Rod, Jeter, Martin, Gardner, C-Grand, Swish, and The Jesus) and the 5-man rotation (CC, A.J., Nova, Freddy, Hughes).  The bench will include Andruw Jones as the 4th OF, Eduardo Nunez as the backup SS/3B, and almost certainly Francisco Cervelli as the 3rd catcher.  In the bullpen, the no-doubt crew includes Mo, D-Rob, Soriano, Boone Logan, and Cory Wade to start the season, which adds up to 22 spots already accounted for.  The team will likely need another utility option on the bench, so someone like Ramiro Pena or Brandon Laird will fill that role for the 23rd spot, and the bullpen as it is has no solid long relief option, so pencil in somebody from the Kontos/Meyers/D.J. Mitchell trio for that role and the 24th roster spot.

This leaves only 1 spot open on the roster and a slew of players who could fill that spot.  This is where the issue of "need vs. want" as it relates to another lefty reliever comes into play.  The Yankees took the approach of deciding they needed another lefty in 2011, hence the signing of Feliciano, and it ended up backfiring on them when he missed the whole season.  But in terms of how that loss affected the bullpen's performance against lefties, the argument could be made that they were just as well off without Feliciano.  Boone Logan, for as much crap as he took around the blogosphere last year, wasn't completely useless against left-handed hitters:

It was a down year for Logan, sure, especially when you look at all the baserunners.  And he wasn't nearly as effective in his LOOGY role as he was in 2010.  But when you add his 2011 in with his career totals against lefties, you get a very respectable 3.07/3.39/3.32 tripleslash with 10.13 K/9 in 114.2 IP.  It's not lights out by any means, but the strikeout numbers suggest the stuff is there to be that kind of pitcher, and the results from 2010 prove that Logan is capable of being that type of pitcher.  And with Logan typically being used in the 6th-7th innings of games, another lefty option would really only be necessary if the Yankees' setup man and closer struggled against left-handed hitting.  Do they?  Not exactly.

Unfortunately, FanGraphs doesn't keep stats on how many lefty bats Mo has turned into kindling in his career, but you get the idea.  The combination of D-Rob and Mo has been very good against lefties, just as they have overall throughout their careers.  It would be asinine for Joe to even consider playing a L/R matchup game with these guys late in games.  Once Joba returns, the Yankees will have another late-inning arm capable of pitching well against lefties (3.93/3.82/3.85, 9.38 K/9 in 188.0 career IP as a starter & reliever), so the need for another lefty option becomes minimized even more.

I hate to break it down to such basic black and white terms and reference predetermined bullpen roles, but Joe already manages the bullpen that way, and because of that the Yankees are in a position where they don't really need another left-handed reliever.  They're looking for 5-6 good innings from their starting pitcher (more if it's CC), and then just a 1-2-inning bridge to Robertson and The Sandman for the 8th and 9th.  Boone Logan in his current semi-LOOGY role fits into that bridge perfectly and can continue to be used this way as an insurance policy for Soriano, who does have a shaky history against lefties (4.80/5.36/5.05 in 2011; 3.50/4.10/4.16 career).  The re-introduction of Joba to the 'pen in mid-2012 will only add to that bridge inning depth, and once D-Rob and Mo enter the game, all talk of matching up goes out the window because of their ability to shut down hitters from either side of the plate.

Like last year, a second lefty in the bullpen would be a nice convenience to have, but it's definitely not something the Yankees need in order for their relief corps to be successful.  A better use for that 25th roster spot would be to add another multiple-inning arm or a Chris Dickerson/Justin Maxwell type to lengthen the bench.  And given their track records, there's not much to suggest that Cabral, O'Conner, or Okajima would be more effective against left-handed hitters than the relievers the Yankees already have.  That's not to say that if one of these guys pitches well enough to earn a spot on merit out of Spring Training that the Yankees shouldn't take them.  But Joe is already a bit too married to the idea of set roles for guys in his bullpen.  There's no reason to take another lefty just for the sake of having another lefty and give him another option for a role that isn't needed.
Posted by Unknown at 9:30 AM No comments:

Barry Larkin being the only player elected to the Baseball Hall of Fame was the big story yesterday.  The smaller ones, and the ones more pertinent to this blog, were the results of 2 former Yankees on the ballot.  And they weren't good.

Donnie Baseball had another weak showing, garnering just 17.8% of the vote.  It was up from his vote total last year but still nowhere near what he'll need to get elected.  And in his 12th year of eligibility, it's unlikely that we'll see Mattingly get the call unless the Veteran's Committee is feeling generous in the future.

Bernie Williams also didn't fare that well, picking up just 9.6% of the votes in his first year on the ballot.  The one bit of good news for Bernie is that he's the only first-year player who earned enough votes to stay on the ballot next year.  That bad news?  Voters don't take into account one's music career.

Truth be told, I never really gave Bernie much thought when it came to HOF contention.  His overall body of work doesn't scream Hall of Famer, but when you dig into the numbers, his peak years are pretty damn good.  From 1996-2002, Bernie posted 5 consecutive ASG selections ('97-'01), 4 consecutive Gold Gloves ('97-2000), a Silver Slugger Award ('02), and a batting title ('98).  His lack of top 5 MVP votes probably hurts his cause, but the 4 rings and postseason numbers should help to counter that.  Based off of his 9.6% this year, Bernie is the longest of longshots to make it in.  But based off his resume, a case can certainly be made. 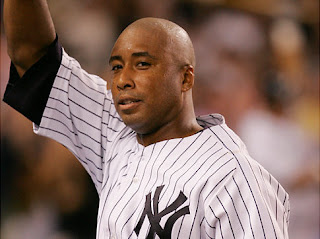