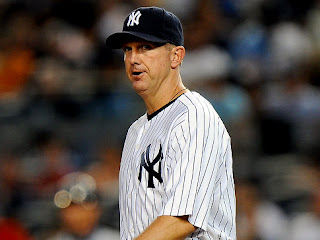 Even though it's old news at this point, I still feel compelled to write a bit more about the firing, letting go, not re-signing, whatever you want to call it, of Dave Eiland.

I was a supporter of the move to make Eiland the pitching coach in 2008 with the signing of then new manager Joe Girardi.  Eiland's claim to fame was his reportedly remarkable work and rapport with the Yankees' Big 3 pitching prospect trio of Phil Hughes, Joba Chamberlain, and Ian Kennedy.  He had worked with them on their way up through the farm system and with the Yankees' plan being to make them the cornerstone of their rotation moving forward, it made sense to have the guy who had the most experience with them working as the pitching coach.

Fast forward to 2.5 years later and Kennedy is no longer with the organization after flaming out horribly in his first 2 stints with the Yanks and becoming part of the 3-team trade that brought Curtis Granderson to the Bronx.  Joba Chamberlain, who I will admit was completely fucked up by the team's horrific plan to manage his workload, has never come close to replicating the electric stuff he showed in 2007 nor has he ever shown the ability to handle the mental aspect of being an effective Major League pitcher as a starter or reliever.  And Phil Hughes, after some injury setbacks, finally broke into the rotation this year and after a fantastic start, came back to Earth as the season wore on and teams began to pick up on his patterns.

As excited as I was about Eiland's hiring, I quickly tired of him through 2008 and 2009, as it seemed like he was always 2 batters too late in coming out to talk to pitchers who were struggling in outings and when he did come out he never seemed to say anything productive to them to make them change their approach or 2 batters too early to come out and talk to a pitcher who wasn't even in any real trouble.  And after watching Joba continue to struggle this year, A.J. continue to be an inconsistent mess for the 2nd year in a row, and Javy never be able to find a way to work effectively with rapidly declining stuff (something Mike Mussina learned how to do in his final season in pinstripes), it was clear that Eiland had peaked and his time had come.

His pedigree with young pitchers got him the job, but it was clear that Eiland is not and never was the right man to get them over the hump and help bring them to that next level.  Pitching in Triple-A versus pitching in the Majors is like night and day, and coaching is the same way.  Eiland just didn't have the capacity and experience as a coach to translate the success his pitchers had at the lower levels to the Majors.  Add to that his inability to work with veterans on the staff to overcome their issues and the fact that there is another bump crop of arms ready to possibly contribute in the next 2 years (Nova, Banuelos, Brackman, Betances, Phelps, Stoneburner, Warren, etc.) and it all added up to a pretty easy decision to me.

I believe Cash when he said Eiland's midseason personal absence didn't contribute to his being let go, and it shouldn't have.  But when you look at his body of work as the pitching coach and consider the future, it's clear the Yankees need someone who can be more hands on and more helpful to both the younger arms on the team and the veterans.  A.J. Burnett is a big cloud hanging over this rotation over the next 3 years with all the money he's making and Eiland had his time to crack the code that makes A.J. tick and couldn't do it.  He had his time to turn Joba into something other than a hard throwing headcase who loses his composure at the first sign of trouble and he couldn't do it.  He had his time to work with Phil Hughes to develop an effective 3rd pitch to make him a potential top flight starter and he couldn't do it.  And the Yankees need somebody who can.

I wish Dave Eiland all the best and I hope whatever personal issues he had during the season have been resolved.  I thank him for the work he did with Joba and Hughes in the Minors, laying the groundwork for the effective pitchers they have been, are, and can be.  But I am also glad to see him go and I don't feel bad for saying that.
Posted by Unknown at 1:45 PM No comments: