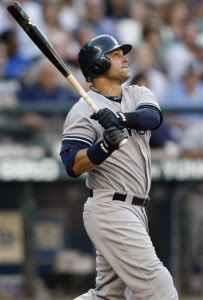 (Photo courtesy of The AP)
Good luck to Swish in the HR Derby tonight. Will he have first-time jitters and be out after the first round?  Or can he get in a groove and make it interesting?

Personally, I don't think Swish has a chance tonight.  If he can keep the kind of quieter, compact swing he's had so far this year like in the picture above from his bomb on Saturday, he could be OK.  But I see him being a little too excited tonight, trying to swing a little harder than usual and tiring himself out.  But hey, maybe this reverse jinx will work and he can pull one out.  In any case, you know he's going to be entertaining.  ESPN would be crazy to not have him mic'd up all night. 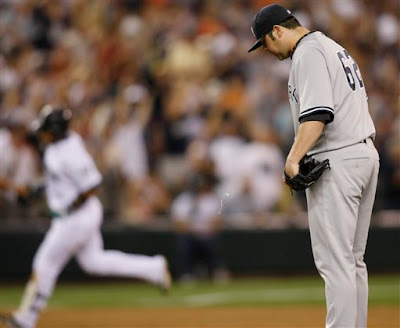 (Photo courtesy of The AP)
Joba sucked again this weekend, what else is new?  At this point he's become nothing more than a glorified Kyle Farnsworth: a guy with all the stuff and talent in the world on paper who just can't go out and consistently get the job done.  Fastballs up in the zone, sliders dropping over the heart of the plate, and never a sign of any ability to adjust, adapt, or re-focus and buckle down.  Is this what Joba has become?  Is this what he's going to be for the rest of the season/ his career?  Was he just a flash in the pan?  All valid questions at this point, and all questions that nobody seems to have the definitive answer to.  But damn if we aren't going to try.  Here's what some of the buzz around the blogosphere was after his latest meltdown.

- Mark Feinsand had a little write-up in his blog with some comments from Joe on Joba's situation.  Just typical coachspeak from Joe on that one.  But really, what else do you expect him to say?

- Kevin Rozell from Zell's had plenty of questions related to Joba, ranging from how the Yankees should go about replacing him as the 8th-inning guy to the very simple (and very smart) question of "has the league just figured Joba out?"

- JMK at RAB looked at Joba's inconsistency and even re-visited every game in which Joba has allowed a run this season.  While it's true that he has had some bad luck, like JMK said, it's what Joba has done AFTER the bad luck that has hurt him and the team this year.  2 other points from this post that stand out:

- Steve S. at TYU had an interesting post yesterday stemming from a recent Girardi interview with Francesa regarding Joba's performance relative to the amount of rest he has had.  Girardi talked about Joba not being as sharp when he's had 4-5 days off and the numbers shown in Steve's post support that theory.  There are also some good breakdowns in here of Joba with varying levels of run support and leverage.  All of it points to how crappy he has been this year.

- Steve followed up that piece with another this morning discussing whether or not Joba should be sent down.  Included are words about his mechanics, flaws in his delivery, conditioning, and focus.

While some of his peripherals have been good this year (9.64 K/9, 2.79 FIP), there is no denying that Joba hasn't been very good.  The fact that there are so many different theories about what the real problem is is not a good sign because it shows that nobody in the organization, least of all Joba, knows what the problem is nor how to fix it.

In a perfect world, Joba would be sent down right now to work out his problems and maybe build a little confidence back up for those higher leverage situations.  He has all his options left, and he's still just 24.  The problem is that the Yankees don't have any better options in the 'pen right now to allow them to replace him.  D-Rob hasn't been much better than Joba, Marte is better as a lefty-lefty guy, And Chan Ho Park and Chad Gaudin just suck.  Right now Joba is the best of a shitty situation and that's why Joe keeps sending him out there.

What should happen is Joba should be moved down a bit in the bullpen rotation to work on correcting his issues in some lower-leverage situations.  But before that can happen, the Yanks need to bring in some new options to try to solidify the setup role for Mo.  Dustin Moseley is here now and that's all well and good, but CHoP and Chad need to go and J-Alba and Mark Melancon need to come in immediately and get their shot.  Stabilizing that role will give the team the option of reducing Joba's role without risking losing more games.  It would be a win-win for everybody involved.

So far the Yanks have gotten by just fine with a crappy Joba and crappier bullpen, but both need to be addressed before the playoffs because the Yankees proved time and time again against their opponents last year that not having a competent bullpen will come back to kill you.  Just ask Minnesota and Philly about that.
Posted by Unknown at 10:35 AM No comments: