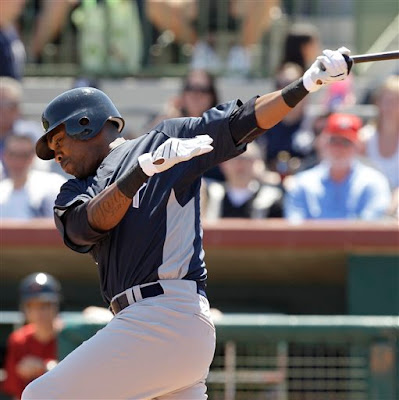 (Photo Courtesy of The AP)
Flashback to February 8; the Yankees had just signed Marcus Thames to a $900,000 minor league contract. I said:

"While he's not guaranteed a spot on the team with the minor league contract, the signing of Thames... gives the Yankees what they needed, a righty power bat off the bench who can play the corner outfield if need be, at less than what they're going to pay Winn to be an unnecessary defensive replacement outfielder who can't hit a lick."

Flash closer back to April 2, when in my season preview for the bench I said about Thames:

"Thames, a righty, will be used mostly to match up with lefties, and his past success in the Majors more than likely gave him the boost over [Jamie] Hoffmann. He is a below-average outfielder, so expect to see Thames mainly as a late-game situational pinch hitter or getting starts on days where Gardner has a bad matchup."

Fast forward to today, where we are 15 games into the year and Marcus Thames is absolutely wrecking shit right now. In 12 at-bats he has 6 hits, including a 2B and a HR, 2 runs scored, and an RBI for a cool 1.372 OPS. He's already been more productive in 5 games this year than he was in his first stint with the Bombers back in '02.

Thames has been exactly what I said he would be and exactly what the Yankees wanted him to be: a guy who will step in for Brett Gardner and mash the crap out of left-handed pitching at a clip that will hopefully negate his incredibly awful defense. His performance thus far has somewhat overshadowed the fact that the Yanks wasted 2 mil on what's left of Randy Winn's rotting corpse (0-10 w/ 4 Ks so far), and even though the argument can still be made that Gardner's overall value created by his offense, defense, and speed on the base paths makes it unnecessary to platoon him with Thames, based on these early returns you have to chalk the signing of Thames up as another check in the "+" column for Cash.
Posted by Unknown at 1:18 PM No comments: