It's hard to not be happy with Phil Hughes' performance today.  He threw 6 innings of 2-run ball, allowed only 6 baserunners, and struck out 5.  After demonstrating improved and maintainable velocity in his first start back, Hughes showed even better velocity today and a much better curveball than he showed in Cleveland.  Whatever work he and Larry Rothschild did to tweak the grip certainly worked as Hughes was very effective with the curveball today and used it to generate 8 swings and misses on his 80 pitches.  And he was aggressive in the strike zone too, throwing 51 of those 80 pitches for strikes.  It didn't take a genius to see that Hughes looked much more confident and comfortable on the mound today than he did against the Indians, and the results spoke to that.

And I'm even OK with Joe taking him out after 6 innings.  80 pitches doesn't seem like that many, but Hughes worked hard early and it's still early for him coming back from the shoulder problems.  With a decent lead and his better bullpen guys available, it was a good situation for Joe to get Hughes out while he could and let him end on a high note.

With Bartolo Colon scuffling and Freddy getting knocked around this weekend, Phil's role is becoming more and more important down the stretch.  Today was another sign that he's on his way back to being that 2-3-type guy that many of us expected coming into the season.
Posted by Unknown at 6:49 PM No comments: 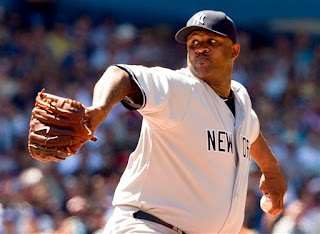 (Courtesy of The AP)
Posted by Unknown at 7:46 AM No comments: