Brendan Ryan Is My New Hero, And Needs To Be On The Team Next Year 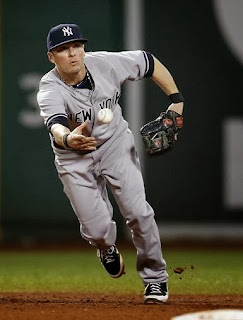 I have a confession to make.  I think I've got a little man crush on Brendan Ryan.  He's only been a Yankee for 11 games, but in those 11 games he's convinced me that he should absolutely be on the roster as the backup shortstop and de facto utility infielder next season.  It makes too much sense for him not to be on the roster.  He's exactly what the Yankees need at the position and a clear upgrade over any and everything they trotted out there this year in their lame attempt to cover for Derek Jeter's ankle.

In case you couldn't figure it out, I'm pretty much done talking about the 2013 season.  It's been a long, disappointing, frustratingly repetitive season to write about, and with 6 games remaining and barely a whisper of a realistic playoff chance remaining I'm starting to turn my attention to next season.  I know, I know, it's probably not going to be much better next season.  I'll cross that bridge when I get to it.  For now I can still hope.

Any discussion about the 2014 Yankees starts with the roster.  The Yankees will be in the unenviable position of having to replace a lot of guys without the traditional means to do it.  Their $189 million payroll goal will put the clamps on their usual way of spending on the free agent market, in a way that will probably make this past offseason look like Black Friday, and they're extremely light on upper-level Minor League talent capable of stepping into everyday roles.  The lineup and the rotation will each have serious issues to address, but what about the bullpen?  The longstanding backbone of the Yankee roster every year is going to undergo a major overhaul and the Yankees aren't exactly preparing themselves well for it down the stretch of this season.

Now that the Minor League season has officially been over for a few weeks, it's time to start rolling out the end-of-season top prospects lists.  Baseball America is posting their top 20 for the Rookie Gulf Coast League today, and the Yankees are well represented with 6 players making the list.

The 6 Yankee farmhands to make it, in order, are Luis Torrens (10th), Miguel Andujar (11th), Abi Avelino (13th), Gosuke Katoh (15th), Luis Severino (17th), and Thairo Estrada (20th).  That's an impressive number of reps at any level of the system, but it does come with the obvious disclaimer of the GCL being the lowest level of US pro ball.  These guys are all far too young to say definitively that any of them will be stars or even make the Majors.

Still, it's an encouraging sign that the lower levels of the system are stocked with potential to come up and fill that talent gap that exists in High and Low-A in the near future.  If you're a BA subscriber, you can log in and read the full write-up on each guy.  BA seems especially high on Torrens, praising his "sound hitting approach," and Avelino, who drew positive remarks for his offense and defensive tools.

Posted by Unknown at 9:12 AM No comments: