When he wants to do some real reporting, Joel Sherman's stuff can be very good.  That was the case with his exclusive interview in The Post today with the doctor scheduled to perform Alex Rodriguez's upcoming left hip surgery.  You can find the entire interview here, and you should definitely read the whole thing, but here are the highlights:

- According to the doctor, Dr. Bryan Kelly, the hip injury was not caused by steroid use but there was "no doubt" that the injury was cause for A-Rod's poor postseason performance.

- The surgery is expected to be performed within the next 2-4 weeks.  There is still lingering joint inflammation in the injured hip, which Dr. Kelly wants gone before the surgery.

- While Dr. Kelly said he believed A-Rod would be able to return from surgery and "perform at a level commensurate to his past production," he did have 3 major concerns that could negatively affect the final results:

Those concerns are the biggest news I'm taking from Sherman's piece, and the fact that there is still lingering damage in the hip that's pushing the surgery timetable back is not a good thing.  But it's also not like any of this comes as a major surprise given A-Rod's recent injury history and his age.  Anybody with half a brain anticipates he's going to come back from this a shell of his former self, and these details from his doctor just reinforce that belief in me.

P.S.- The Center for Hip Pain and Preservation at the Hospital for Special Surgery sounds like a fun place, huh?
Posted by Unknown at 2:27 PM No comments:

On Taking Back Rafael Soriano 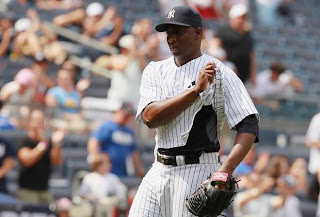 (I wonder if he untucks after every failed contract pitch by Boras.  Courtesy of Getty Images)

As reader Ruben wisely put it on the AB4AR Facebook Page last night, we probably shouldn't feel this good about Scott Boras making a mistake.  But it certainly appears that he has according to this tweet from Bob Klapisch yesterday afternoon.  Klapisch reported that Boras reached out to the Yankees to ask if they'd be interested in bringing Rafael Soriano back on a 1-year deal and that the request was "flatly denied" by the Yankees, keeping a long and painfully slow offseason for Soriano going.

You'll remember that Soriano (and Boras) turned down a $14 million option for this season to test the FA waters after Soriano's great 2012 filling in for Mo, then turned down the $13.3 million qualifying offer the Yankees made.  Now, 2+ months into the offseason with no potential suitors and next to no chatter about him, Soriano and Boras appear to have retraced their steps back to the beginning of their screw-up.  Cash stated before this story came out that he is not looking for more bullpen help, nor should he be, but Boras' request raises an interesting question.  If the market continues to be quiet for Soriano, and his asking price continues to come down, at what point would you make a 1-year offer to him and bring him back for 2013?