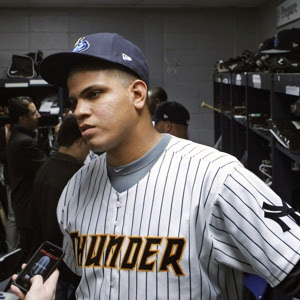 It was almost a throw-away part of Thursday's story in The Post about Rafael Soriano opting out of the final year of his contract, but the report on MiL pitching coordinator Nardi Contreras being reassigned and Gil Patterson being hired away from the Oakland A's to fill the position is actually a much more significant and newsworthy story.  This move comes on the heels of longtime VP of Player Personnel and former pitching coach Billy Connors being fired, and signifies that the Yankee brass has had enough of the team's inability to develop quality starting pitching.  The team hasn't been short on young pitchers with the potential to make an impact over the last couple years, but they've been woefully short on guys actually making that impact.  Too often, we've seen the organization's top pitching prospects fail to reach their ceiling or even reach the Majors, and it's clear that a change was needed.
Read more »
Posted by Unknown at 9:29 AM No comments: