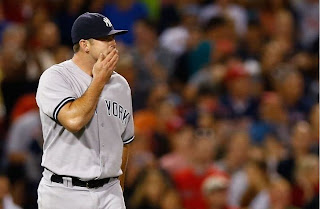 It's been the anchor of the pitching staff for years, but down the stretch of this season the Yankee bullpen has completely fallen apart.  After giving up 4 more runs in 4 innings of work last night, the 'pen finds itself with the worst ERA (6.69) and second worst FIP (5.31) in MLB since the start of September.  The collective -0.4 fWAR this month is 4th worst and a comparison of the HR-related stats shines a big bright light on the problem.  New York's 12 HR allowed by the bullpen this month is 5 more than the second highest total, accounting for almost 20% of the 64 hits they've given up and few key blown late game leads.  From steadying roster force to productivity fallout zone, the Yankee 'pen has joined the rotation and lineup as a major problem area at the worst possible time.

What To Think About CC's Future? 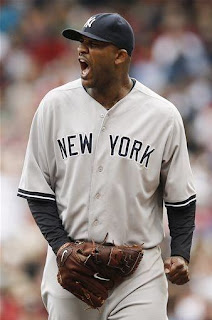 It was a weekend of rotation problems on full display for the Yankees.  Hiroki Kuroda continued to get killed on misplaced pitches in the strike zone and lack of offspeed bite on Friday.  Ivan Nova looked like an absolute mess on the mound last night, both physically and mentally if you subscribe to Orel Hershiser's way of thinking when looking at pitchers' body language.  But by far the biggest rotational black eye was the continued ineffectiveness of CC Sabathia on Saturday.  The big guy gave up 13 combined baserunners and 5 ER in 6 innings of work, the latest in a string of poor starts that stretches back months and has shown no signs of being corrected.

Sabathia's season ERA is up to 4.90, which ranks him 79th out of 83 MLB starters who've pitched enough innings to qualify for the ERA title.  His 4.12 FIP is not quite as bad, although it does place him firmly in the bottom third of qualified starters.  By most statistical measurements, Sabathia has been one of the worst starting pitchers in baseball this season, with the worst of his worst coming post-ASB.

There's no way to sugarcoat a 6.58/4.31 second half split, but what does this downtrend in Sabathia's 2013 performance say about his future?  Last night, SJK of NoMaas pointed to CC's K and BB rates as reasons to still believe in CC and expect a bounce back from him in 2013.  While it's a valid argument that shows he still has the stuff to pitch successfully, addressing the "how" of that bounce back is really the key to determining just how rapidly CC is going to continue to decline.

A-Rod's Legs Starting To Jeter Out On Him

For the second time in less than a week, Alex Rodriguez was removed from a game due to injuries to his legs.  Early last week it was the left hamstring that started to nag, forcing Joe to limit Alex to just a DH role for the rest of the week.  Last night it was his right calf that reportedly felt sore and caused him pain running the bases.  He was pinch hit for and removed from the game in the top of the 5th inning.

If this story sounds familiar, it's because it's almost exactly the same as what went down with Derek Jeter this season.  He came back from leg injuries without the proper amount of time to build up his leg strength and it led to further complications and the eventual end of his season.  Alex seems to be falling victim to the same fate after returning from his offseason hip surgery.  Like Jeter, A-Rod didn't have a lot of time to work his legs back into game shape.  Like Jeter, that lack of leg conditioning limited his ability to play the field and play every day.  And like Jeter, the compounding issues with his legs as a result of having to play through those ailments seems to be adding up to force A-Rod off the field.

He's been a tremendous and somewhat surprising boost to the lineup since coming off the DL, off-the-field circus aside.  Now A-Rod might finish the season and head into his offseason appeal battle on the sidelines instead of playing out what could be the final 12 games of his career. 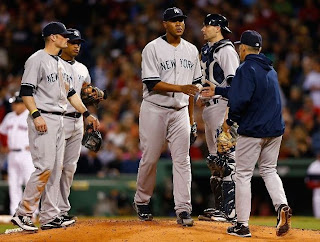 What a disappointing game to watch.  It never had the feel like the Yankees actually had a chance, even with Clay Buchholz struggling mightily with his fastball command.  The moment proved to be too big for Ivan Nova again, the lineup was punchless, and the bullpen made things even worse.  The full detailed game notes can be found below in the live blog; check out the rest of the game recap after the jump.