People Want THIS Guy In The Rotation Next Year? 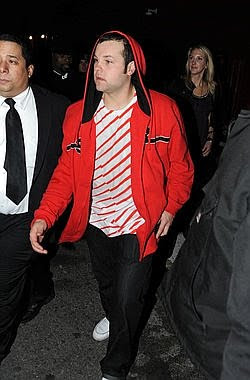 Hey, it's that guy from the gay "Twilight" movies!  Oh no, wait, it's just Joba dressed like a 17-year-old emo kid.  And he's looking a bit pale; maybe he grabbed the last of his Mom's meth stash.

Just because you won the World Series doesn't mean you can just forget about representing yourself and the organization properly, son.  Take the hoodie off, tuck the shirt in, put some dress shoes on, and comb your fucking hair.

In an attempt to get a headstart on the Yankees in competing for next season, the Fraud Sox traded for former Marlins' outfielder Jeremy Hermida yesterday.  Yes, that Jeremy Hermida, the same guy who hit .259 with 13 HRs, 47 RBIs, and a .740 OPS last season.  The same guy who the Marlins have been hoping will put it all together since the moment he began playing for them.  When you're trying to compete with the suddenly head-and-shoulders above you New York Yankees, I guess you have to jump at the chance to trade 2 prospects for a guy with questionable heart and dedication issues and who you could have gotten in free agency after the Marlins dumped him.

Not to be outdone, the Angels decided to re-sign Bobby Abreu to a 2-year, $19 million deal.  You remember Bobby, right?  He's the same guy who hit .265 with 0 HRs and 3 RBIs in the postseason, .160/.276/.240 in the ALCS.  Call me crazy, but I wouldn't be shelling out that much for a 35-year-old outfielder who is deathly afraid of the outfield wall and has somehow managed to get through his career without a serious injury.  The Angels struck gold with their $5 mil deal last season, and were rewarded with 103 RBIs, but I wouldn't count on "Mr. July" putting those numbers up again next year.

I give props for each of the Yankees biggest "rivals" trying to jump early at the chance to improve their teams while the Yankees are cruising the Canyon, but if these are the moves they're going to make, they might as well just forfeit 2010 right now.  Everybody saw what Cashman did last offseason and at the trade deadline this season; the dude is playing fucking Bobby Fisher-level chess right now while the Sox and Halos are playing Hungry, Hungry Hippos trying to match him.  28 could come easier than we think.
Posted by Unknown at 7:09 PM No comments:

The 10 Biggest Plays of The World Series

After the two leadoff runners got on, this shot by Utley set the tone for the rest of the game and for A.J.'s bad outing.  In a potential series-clinching game for New York, Utley's home run gave the Phillies the early boost they needed and never let up as they got the win they needed to keep their season alive.

This game was all Yankees after Andy struggled in the early innings but once the game got the bullpen, the Yankees could have made the outcome more interesting than it had to be.  With the Phillies still lingering with a manageable 7-4 deficit, Matsui stepped off the bench cold and delivered a rally-killing solo bomb to give Phil "Wild Thing" Hughes and Mo enough cushion to cruise to the finish and recapture home field advantage.

Jeter stepped in as the tying run, and although his grounder did score Jorge Posada, it also took 2 runners off base and prevented Teix from being the tying run when he came to the plate after.  More importantly, Jeter's bad swing in a good hitters' count helped calm a quickly-crumbling Ryan Madson and allowed him to calm down and re-focus to strike out Teix to end the game and keep the Phillies alive.

After the Yankees took a 4-2 lead in the top of the inning, CC started the bottom half by giving up a single and a walk to Rollins and Victorino and the Phillies seemed to be in business with the heart of their order coming up.  But CC made great pitches and retired Utley and Howard on pop ups to Jeter before getting Werth swinging to end the inning.  This was big because it allowed the Yanks to hold the lead they had just built and made Utley's HR in the 7th less important as it still left the Phillies one run behind.  If CC crumbles there and gives up the lead, maybe the Yankees approach is different for the rest of the game and they don't score the late runs to win.

This was the at-bat that exposed Pedro as having no stuff early in the game as he had no desire to throw Hideki anything off-speed and didn't have the heat on his fastball to get it by Godzilla inside.  It got the crowd into the game and on Pedro and provided an early cushion for Andy Pettitte, who also didn't have his A-game.

A battle of an at-bat ended with Matsui being the victor as he parked a pretty good curveball from Pedro into the right field seats.  It ended Pedro's night, which essentially wasted the only good performance he had in the series, made Charlie Manuel look bad for letting Pedro start the 6th inning after having a high pitch count through 5, andnwas the game-winning RBI in a game the Yankees had to win.

This logic by Joe was the exact opposite of what Manuel did with Pedro.  By not playing around and bringing in Mo for 6 outs, Joe gave his team the best chance to hold the lead and win a tight game and didn't waste a great starting effort by A.J.  In a must-win situation, Joe left the lead in the hands of his best pitcher.

Sure he was great all night and gave the Phillies a guaranteed win by being out there to finish it, but Lee racked up 122 pitches on the night and was noticeably tired in the 9th inning when the Yanks finally put some good swings on his pitches.  This extra work made Lee unavailable to throw on short rest in Game 4, and the Yankees ended up getting the win against Blanton and the awful Phillies bullpen, putting themselves in a 3-1 hole they wouldn't climb out of.  Manuel was so caught up in winning Game 1 that he didn't think of the effect Lee's long effort would have on the rest of the series.  You should be able to do count on your bullpen to get 3 outs when you have a 6-run lead, and the fact that Charlie didn't may have cost him a chance to even the series in Game 4.

After killing Pedro and getting him out early, Hideki drove the dagger into the heart of the Phillies with this double that made the lead 7-1.  There was plenty of time left to come back , but this hit seemed to take what little wind was left out of the sails of the Phils and provide plenty of insurance for Andy Pettitte and the Yankee bullpen.  Of all of Matsui's big hits in the series, this was the biggest.

With the infield playing the shift against a left-handed hitting Teixeira, Damon seized the opportunity presented to him when he stole second base cleanly.  His pop-up slide and quick thinking gave him the chance to take an uncovered 3rd base and he didn't hesitate.  Putting himself at 3rd rattled Lidge's already iffy confidence, evidenced by his hitting Teix, and then changed his approach against A-Rod as he was too scared to throw his slider.  The fastball that he grooved to A-Rod ended up being deposited into the left field gap and Damon trotted home with what would be the game-winning run.  Without getting himself to 3rd by being smart and recognizing the situation, maybe Damon gets stranded and Lidge never crumbles.  Instead, Damon changed the whole approach to the situation and scored the game-winning run in a game that gave the Yanks a commanding 3-1 series lead.
Posted by Unknown at 6:17 PM No comments: