As I mentioned in the Linkapalooza earlier, it's a family weekend and a lacrosse weekend for me, so the site is going to be a little light on content over the next 3 days.  You'll get a game recap tomorrow morning (because I can actually watch the game tonight), a game recap Sunday, and a game recap on Monday.  Anything more than that, consider it gravy and consider yourselves lucky that I love you and love the Yankees enough to tell my family to pound sand while I hover over their laptop in the hotel.
Posted by Unknown at 9:58 PM No comments:

Memorial Day weekend.  Always a good time and this year should be no different.  I'm flying home this afternoon to join my family up at Foxboro for the NCAA lacrosse championships this weekend, which means getting buzzed in the parking lot drinking good beer with my old man and sneaking looks at college girls that I'm probably too old to even be thinking about now.  If the Rangers can pull their heads out of their asses and win tonight, there will also be some serious Game 7 viewing/boozing somewhere with one of my best friends from home.  Good times.  Onto the links!

- On Monday, George S. of Gutty Gritty Yankees, making his Linkapalooza debut, used math and logic to shoot down the MSM hand wringing over A-Rod's early lack of HR power.  What a concept!

- Rich Kaufman of NYYUniverse pointed out the lack of run support that Hiroki Kuroda has gotten so far, which is a very fair point to make.  Yes, Kuroda has been generally bad, but he also hasn't gotten the type of offensive support he probably expected going from the Dodgers to the Yankees.

- On Tuesday, William Juliano of The Captain's Blog looked at the numbers breakdown to try to get to the root cause of the Yankees' recent struggles hitting with RISP.

- Brien Jackson of IIATMS commented on the lack of Brett Gardner in the lineup and how his absence is hurting the team's production.  Who woulda thought that it was the #9 hitter who held the key to the Yankees' offensive success?

- Mustang of It Is High... posted something quick on the Yankee radio broadcast, but the only thing that really matters is the hilariously awesome screen shot of John Sterling that was used.  Good stuff.

- Mike Axisa of RAB looked into how the Yankee lineup is handling pitches in the strike zone, and the numbers suggest that problems there could be a contributing factor to the recent stagnant offense.

- Michael Augustine of Bronx Baseball Daily handed out his latest round of player grades after 42 games.  Not a lot I can argue with there.

- Frank Campagnola of Pinstripe Alley discussed the disconnect between the eye test and the numbers when it comes to Curtis Granderson's center field defense.

- Mike Eder of TYA broke down Phil Hughes' pitch selection in May to find the adjustments he's made to improve his game.

- On Thursday, Jorge Arangure Jr. wrote a piece chronicling Ivan Nova's path to the Yankee starting rotation.  Regardless of how you feel about how he's pitched this season, this is a must-read and better than anything Wallace Matthews writes.

- Fishjam25 of Yankees Fans Unite continued the Nova discussion by delving into the 2 different Novas we've seen (GB pitcher vs. K pitcher) and stating that Nova needs to find a pitching identity.

- Anthony Rushing of Yanks Go Yard commented on Phil Hughes' strong May and the need for him to be consistent.  It's something we've heard plenty of times regarding Hughes, but it still rings true.

With the Yankees on the West Coast for their first long-distance road trip of the season, it only seems fitting to go with something Cali-themed.  I've already done Biggie this year, but so the F what?  Truth be told, I've always thought this was a better song than "California Love."  There.  I said it.  I ride East Coast 'til I die.

Enjoy your long weekends, everybody.  Happy Memorial Day and go Yankees!
Posted by Unknown at 12:50 PM No comments: 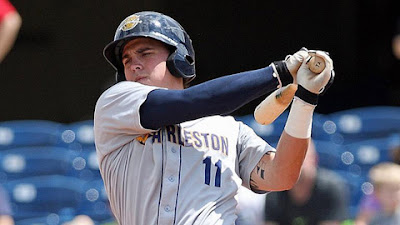 Since yesterday was a travel day for the Yankees and there's no game to recap, what better time than now to catch up on the goings on in the Yankee farm system?

- There have been a couple of good offensive performances, but not from anybody you'd see popping up on a Top Prospects list.  Jack Cust has finally found his stroke, and he's up to 4 HR and 21 RBI on the season, and Ronnier Mustelier has continued his hit parade since being called up earlier in the month.

- With some players ahead of him moving on, Brett Marshall is poised to break into a lot of Yankee Top 10 lists this year, and on the surface he's been very good (2.98 ERA, 2.65 BB/9, .227 BA Against).  But his strikeouts have dipped dramatically this season (just 27 in 54.1 IP) and it'd be nice to see him start flashing his swing-and-miss stuff again.

- Their lineup has been ravaged by injuries, but Double-A Trenton has got both Corban Joseph and David Adams back as they both try to work all the way back from health issues.  And after missing a significant chunk of time, Zoilo Almonte made his return to the lineup last night.

- There's been some shuffling in the High-A Tampa rotation, as Nik Turley and Jose Ramirez have both hit the DL.  Zach Nuding continues to pitch well, and with Matt Tracy returning and Caleb Cotham and Evan DeLuca being promoted, there's plenty of guys to keep an eye on until Turley returns.

- Down in Charleston, the Tyler Austin train just keeps rolling on.  He had 4 hits last night, including the game-tying and game-winning ones, and currently sports a .443 wOBA with 30 XBH.  There's really no reason NOT to promote him to Tampa; he's got nothing left to learn at this level.

- Jose Campos is still on the DL with elbow inflammation, but Bryan Mitchell has stepped up in his absence with a 2.53/3.11 ERA/FIP split and a MiL career high 9.07 K/9.  Evan Rutckyj has joined the rotation to help cover for the loss of Campos as well.