Almost keeled over when I read this on RAB last night:

"Biggest news of the day is the return of Austin Romine, who went 0-for-2 with an RBI ground out while catching the first three innings."

FINALLY!!  I half expected to see the kid walking around in one of those aluminum back braces like Dee from "Always Sunny" for the rest of the season.  Now he's back on the field again.  This season is already going to be a down one for Romine, but it's not completely lost if he can stay healthy from here on out.  And with the way the Yankee catchers have struggled this year, he can still keep some of his prospect shine with a good couple of months.
Posted by Unknown at 11:31 AM No comments: 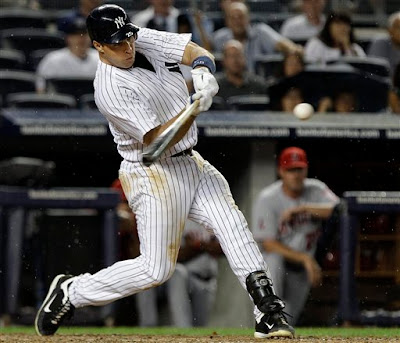 Mark Trumbo is going to be the next great Yankee killer.  I can feel it in my bones.  Every good team in the AL seems to have one these days, and he just seems like he's the next one in the making for the Angels.  He looked like he was going to be the Angels' hero last night after his big 3-run homer in the 7th, and it took some out-heroing from Mark Teixeira to make sure he wouldn't be, but I'd feel a lot more comfortable pitching around that guy in playoff situations if the Yankees have the opportunity.

- The Angels got on the board first on an Erick Aybar solo shot in the top of the 3rd.  Hiroki Kuroda left a sinker up, something he did on more than one occasion last night, and Aybar made him pay.

- The Yankees didn't stay behind for long, though, as Mark Teixeira blasted a home run of his own in the bottom half of the inning, this one a 2-run job thanks to Derek Jeter being on base, and the Yankees took a 2-1 lead.

- Curtis Granderson created a primo run-scoring opportunity by leading off the bottom of the 6th with a triple.  But the trio of Teix, A-Rod, and Cano failed to bring him in with a couple of groundouts and a soft lineout.  Props to C.J. Wilson for making his pitches, but goddamn!  Somebody hit the ball in the air.

- Kuroda got through the next 3 innings facing the minimum number of batters thanks to Russell Martin's 2nd caught base stealer of the night in the 5th, and recorded 7 of the 9 outs on the ground, but he was just a little bit off with his stuff all night.

- That offness finally came back to bite him in the 7th when the first 2 batters got aboard on a single and an HBP and Trumbo hit another sinker that stayed up for a 3-run homer and a 4-2 Angels lead.  Those 3 runs, and the bonus one that Albert Pujols drove in the next inning made Kuroda's night look worse than it was.

- Wilson exited after 7 and the Yankees wasted no time going to town on Scott Downs.  Jeter doubled, C-Grand walked, and Teix smoked a hanging 1-2 curve into the left field bleachers to tie the game at 5.

- With nobody out, the rally was far from over, and after Nick Swisher walked and was replaced by Dewayne Wise, the Angels chose to intentionally walk pinch hitter Raul Ibanez to get to Martin.  That plan backfired as Martin hit a single down the right field to score Wise and give the Yankees a 6-5 lead that they wouldn't lose in the 9th.