D-Rob's line since returning to the active roster on 6/15:

- 4 appearances in a little over a week?  Check.

- At least on baserunner in each outing?  Check.

- Extra drama being added to each outing because of the presence of said baserunners?  Check. 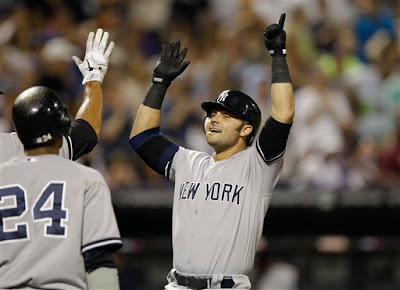 (Touchdown!  Courtesy of The AP)﻿

The internet at my apartment was kind enough to crap out on me in the middle of the 8th inning last night, so while you can refer back to last night's live blog to get everything that happened leading up to that point, I'll use the space here to cover what happened after and hand out the AB4AR good checks and bad checks on another Subway Series victory for the Yankees.

- After Robinson Cano's MONSTER blast to dead center field to give the Yankees the 6-5 lead in the 8th, the whole "Freddy Garcia coming into a close game" idea was scrapped and Joe went to D-Rob to pitch the bottom half.

- Pitching for the 2nd consecutive day for the first time since coming back, D-Rob did his usual thing, striking out the first 2 batters of the inning before Andres Torres singled to right, stole second, and took third on a balk.  After falling behind Ruben Tejada 3-0, Robertson battled back and forced a groundout to A-Rod to end the threat.

- Rafael Soriano came into the game to close it out in the 9th, and the rain came with him, but it didn't bother Raffy as he worked around a 2-out Lucas Duda single to pick up his 15th save of the season.