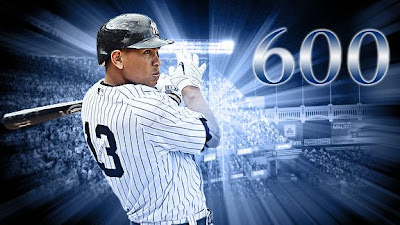 (Photo used courtesy of ESPN.com)
Well it's official.  The Horse is now a member of the 600 Home Run Club and surprisingly enough, ESPN chose not to be openly or subtly derogatory in their coverage on the website.  Congrats, Alex.

Now that that's taken care of, can we get back to winning some ballgames? 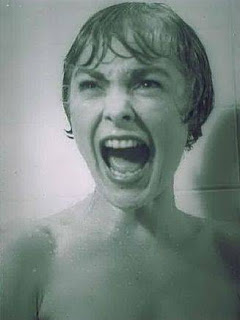 Now I haven't been a fan of how the Yanks have played lately; it's been pretty brutal.  But I'm not about to go jump off a cliff here.  Yes, they've lost 3 in a row and yes, they're only 5-5 over their last 10 games and lucky to be at that mark while the Rays have been on fire.  It's called a slump and every team has them.  The starting pitching has been atrocious lately and the offense has been wildly inconsistent.  It's not like this is how the team is going to play for the rest of the season, so if anybody is thinking about hitting the panic button, just chill out.

At this point it's obvious that the 600th home run is in A-Rod's head.  His swing is completely out of whack, his balance is off, and he's swinging at everything.  But he's going to hit it eventually and when he does, he'll settle back in.  CC's mechanics are a bit off, but unlike A.J., he has some mental toughness and testicular fortitude and will figure out how to fix the problems.

The biggest thing you can take out of the last couple weeks is that Andy Pettitte is undoubtedly the Yankee MVP this season.  The rotation isn't the same without him and the "stopper" presence he brings when they come across a shitty start by A.J.  He also provides more rest for the bullpen with the length he's given the Yankees this year, something that's been lacking with Mitre and Moseley getting his starts.  So with all due respect to Robinson Cano, the MVP of the team is Pettite hands down.

Oh, and even without him, they're still 8-7 since he went on the DL.  So let ESPN get excited about the Rays overtaking the Yanks for first place again, because I'm sure as shit not.
Posted by Unknown at 9:30 AM No comments: