The Horse Coming Back A Little Slow

The plan was for A-Rod to return to the Yankee lineup late this week, possibly tonight, but with the way things are going right now for him in his rehab, now that return could be delayed a bit.

While his timing and swing at the plate has looked pretty good, The Horse admitted that the knee has been in the back of his mind and he hasn't put full torque into his swing.  The same thing applies to his running the bases, where he's been slowly ratcheting up the intensity, but has yet to go full out in running the bases because of the knee.  The biggest point of concern has been in the field, though, where A-Rod has really looked rough, dropping 2 pop ups the other night and having a hard hit ground ball go right between the wickets for a 2-run error last night. 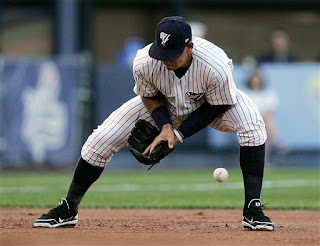 (Oops.  Courtesy of The AP)﻿
None of this should come as a major concern for the Yankees or Yankee fans, though.  The reaction by A-Rod to his knee is normal and the same thing we heard from Bartolo Colon when he came back from the DL.  And the problems in the field are easily attributable to rust and will fix themselves over time.  The Yankees are in a very good position, first in the division and 8 full games up on their nearest WC competition, to let A-Rod take as much time as he needs to get right and it's to their benefit to do so.  They haven't missed a beat without him in the lineup and continue to play winning baseball, last night aside, as we speak.  There is no glaring need for A-Rod to get back in the lineup right now and hopefully Joe is smart enough to recognize that.

It may be later than they planned, but the Yankees don't need A-Rod in August.  They don't need him in September.  They need him in October and they need him at 100% then, so as long as it takes to get him back to 100% and feeling comfortable in all aspects of the game, so be it.
Posted by Unknown at 9:34 AM No comments: