Thank you to the NHL for scheduling Game 5 of the Stanley Cup Finals for Saturday and not tonight.  If it was tonight, I don't think I'd make it to the second intermission.  From the NBA Finals game on Tuesday night to Game 4 Wednesday night back to NBA Finals Game 7 last night, that's a lot of late nights and 4-hour text marathons with everybody I know who's been watching.  Waking up early to write game recaps about some of the puke we've seen on the baseball diamond this week doesn't make things any easier.  I need me a nap and I needed it yesterday.  If I'm still in the office by the team this post goes up later, I have failed myself as a cubicle monkey and a human being.  Now onto the links!

- On Monday, Chad Jennings of LoHud had the real meat and potatoes from the Cashman conference call, with detailed quotes about Teix, Youkilis, and the trade market.

- Mike Axisa of RAB touched on the positive trend in Dellin Betances' performance since being converted back to the bullpen in Triple-A.

- On Tuesday, el duque of It Is High... was back with his always snarky and almost always spot on dose of perspective on the current lay of the Yankee land.

- On Wednesday, Derek Albin of Pinstripe Pundits started looking at realistic trade options for the Yankees as the deadline starts to appear in the distance.

- Mark Feinsand of The Daily News hopped in the way back machine with Brian Cashman and got Cash's explanation on the "Girardi-over-Mattingly" managerial hire.

- On Thursday, William Juliano of The Captain's Blog analyzed the Yankees' performance against their Pythagorean expectation now that they have an even run differential and saw bad things in their future.

- Walter Peck of NoMaas wasn't all that thrilled with the Yankees' promotional selections for the All Star Game.  You mean Ichiro doesn't deserve to be there??

- On Friday, Michael Eder of IIATMS/TYA pondered the possibility of David Phelps maintaining his high K rate.  That has always stuck out to me more than anything about Phelps.  He was never a high K guy in the upper levels of the Minors.

Tanya Bondurant of Pinstriped Bible wondered if Michael Pineda could take Phil Hughes' rotation spot.  Yes, Tanya.  Yes he could and yes he will.

- SG of RLYW compared the lineup's actual performance to its projected performance to show how badly they've been underproducing.  If you want to take that as a sign that things will turn around, be my guest.

This week's jam is "Tomorrow Never Knows" by The Beatles.  Good tune to unwind to after a long, tiring week.

Enjoy your weekends, everybody.
Posted by Unknown at 2:45 PM No comments:

This Offense Is Offensive

There's no need to sugarcoat it anymore.  It's a scientific fact at this point, why try holding out hope that it's going to turn around?  This offense sucks.  It sucks and it sucks hard.  Whether you want to blame ownership, Cashman, or both, we can all be unified in agreement that this performance from the lineup night in and night out is just pathetic.  Each game brings a new low, and the numbers and anecdotes to prove it are starting to get frightening.  Reid Brignac isn't OPSing CC's playing weight.  Vernon Wells may have inadvertently started the takeover of the machines.  Francisco Cervelli is the team wOBA leader right now, by a wide margin, and he hasn't played a game since April 26th.  Alberto Gonzalez is statistically the team's best offensive shortstop.

What's Up With Andy?

Andy Pettitte turned in another ho-hum performance last night, giving up 5 ER on 9 hits in 6.2 innings of work.  Since coming off the DL, he's posted a 4.91 ERA in 25.2 IP, with 30 hits allowed in those innings.  Like CC, he's been much more hittable since coming off the DL, but why?  Is the back still bothering him?  Has he lost some of his stuff because of it?

Hard to say.  Pettitte's FIP for June is just 2.66, a full 2 runs lower than his ERA.  He's walked fewer batters on average than he did in April or May, and there's nothing in his June contact splits to suggest he's getting knocked around the park by opposing hitters.  He's got a .341 BABIP against this month, so there could just be some bad luck in play here.

The Yankees need more from Andy, there's no doubting that.  But to turn his June struggles into a bigger story might be a bit premature based on his overall statistical and PitchF/X profile.  The only thing that stands out to me is a slight trend in him leaving his cutter up in the zone a bit, and even that is registering him a better whiff rate on the pitch than he had in the first 2 months.  If Andy's back is still giving him problems, there's really not much other than the ERA to support it.  It could just be a case of him needing a few breaks to go his way. 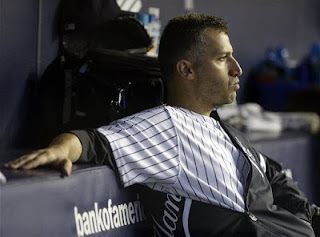