A year ago yesterday, in a situation similar to the one they found themselves in this year, the Yankees made the foolish decision to sign Rafael Soriano.  The move did not help them fill their biggest area of need (the rotation) and was tremendously costly in terms of years (3), money ($35 million), and the fact that they had to surrender their 1st-round draft pick as a result.

Last night, the Yankees cashed in on learning from the mistake of Soriano, adding 2 very good starting pitchers to their rotation while sacrificing very little in terms of years (Pineda under team control for 5; Kuroda on a 1-year contract), money ($10 mil for Kuroda), and prospects (only Jesus).  It's like night and day.

The lesson, as always, is to trust Cash.  It's amazing what a good GM can do when ownership stays out of the way and let's him do his job.
Posted by Unknown at 2:51 PM No comments:

Well last night was fun, huh?  One minute you're sitting around scratching your balls, wondering how the Celtics are going to survive a compacted NBA season being so old and thinking about whether or not you like Daniel Bryan's heel turn, and the next minute the internet is blowing up with stories about Jesus Montero being traded for Michael Pineda, then blowing up again as the Yankees follow up that story with another story of them inking Hiroki Kuroda to a one-year deal.  In the span of 45 minutes, the Yankees came out of left field to completely overhaul their rotation in a way that helps them immediately and in the future.  My thoughts on what transpired last night, in somewhat of a particular order.

- Initial reaction was a negative one.  In my head, it didn't make sense to give up a piece of your starting lineup, a player who could inject some life into an aging lineup and be the next great Yankee bat, and a pitcher who could probably be the #4 guy in the 2012 rotation for just one piece that brings immediate help.  Subtracting 2 of your best 25 players to get only 1 back that can fill that gap didn't add up.  And yeah, I know it was all just the prospect hugging talking.

- The more I thought about it, the more I read up on Pineda and Jose Campos, and the more I talked with my guys from TYA, the better this trade started to look for New York.  Pineda is a stud, a young stud, who already has top-of-the-rotation stuff and could progress into an ace with the right coaching and development.  He's just 22 years old, stands 6'5"/240, and is coming off a first year in the Majors that saw him throw 171 innings of 3.74 ERA/3.42 FIP ball with 9.11 K/9 and 2.89 BB/9, a performance that earned him a 5th place finish in the AL ROY voting, even though he probably should have been top 3. 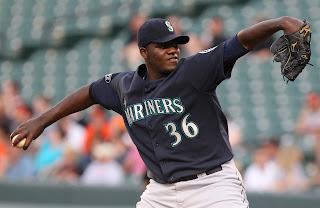 - An no, I'm not concerned about Pineda's flyball tendencies coming to Yankee Stadium, his home/road splits, or the fact that he faded a bit down the stretch in 2011.  He's a young pitcher; those things happen to young pitchers.  What matters is that he has dynamite stuff, a track record of success, and is still young enough to have tons of room to improve.  He's already better than any of the internal #2 starting options the Yankees had, and pairing a pitcher like him with Larry Rothschild could bring out real greatness in Pineda.

- The Yankees' position on Montero has always been that they would only move him for the right deal, and this deal last night was the perfect definition of that.  They traded from a position of great organizational strength, and traded the one prospect from that position with the most question marks surrounding his ability to play that position, to improve the position of greatest weakness at the Major League level and finally accomplish what they said was their biggest offseason goal.

- And in regards to Montero, the fact that the Yankees still didn't seem keen at all on the idea of him catching a lot of innings should have been a clue that he was still on the block.  If they really only viewed him as a DH option, then he obviously holds more value to them as a trade piece.  And with the package they got back, that's the kind of deal you include a piece like Montero in.

- I guess I can check off #5 on the Offseason To-Do List.

- The finer details of this trade are what puts Cash's stamp on this.  Throwing Noesi into the trade, a guy who despite good stuff and a solid performance last year was really just organizational depth at the moment, helps to ease some of the Mariners' sting of giving up Pineda as Noesi can move into their 2012 rotation.  And by doing that, throwing in 2 guys who had success at the Major League level last year, Cash gave himself some leverage to ask for something else in return and that turned out to be Campos, a top prospect in the Mariners' system.  Cash just doing the damn thing again!

- On Campos, yes he's very young and only has a year of Low-A ball under his belt.  But the numbers he put up there (83 K/13 BB in 81.1 IP over 14 starts) are very impressive for a 19-year-old.  And at 6'4"/195 with what's already described as an elite fastball that he commands to both sides of the plate and a developing change and curveball, the pieces are there for this kid to develop into a #1-#2-type starter.  Campos essentially slides into Jesus' spot on the Yankees' top prospects list (although not at #1), and gives them another high-ceiling pitching prospect to work with.

- If the Pineda trade didn't signal the death knell of A.J. Burnett's time in the Yankee rotation, then the Kuroda signing certainly did, and probably also for Freddy Garcia.  The Yankees add a young #2 pitcher and a guy who, even at his age and switching to the AL East, is still probably a true #3 at worst, to replace two guys who are #4 starters at best.  And I think given the age of Burnett and Garcia, it's likely that Hughes will win/get the #5 spot in this rotation and one of Burnett and Garcia will be traded while the other assumes the mop-up/longman role in the bullpen.

- If the one to be traded does turn out to be A.J., even if the Yankees just get a box of baseball cards back for him, I'm calling out of work to throw a party at my place.  You're all invited.

- Quickly on Kuroda, I like him in this role as the new #3, much more than I would have liked the Yankees signing him a month ago for $12-14 mil to be the #2.  He's got solid K rates, he limits walks, and his GB rate is good, something that will serve him well pitching in Yankee Stadium and should help alleviate any issues that come with Pineda being more of a flyball pitcher.  Kuroda gives the Yankees better depth and better talent than what they already had in the middle of their rotation, and on a one-year deal, doesn't interfere in plans to trim payroll for 2014.  As much as I wanted Roy Oswalt, Kuroda is just as solid an option.

- Another interesting subplot to this whole situation is the "Hal talking to Scott Boras" story that dominated the better part of the previous two days.  If I can go Mel Gibson in "Conspiracy Theory" for a second, I think the Yankees played Boras and used him as leverage to make this trade happen and also as a way to throw the media off their trail while they finalized the trade and the deal with Kuroda.

All we've been hearing about is how the Yankees were staying in contact with the Kurodas and Oswalts of the world and nothing about a potential Montero-for-Pineda swap.  Knowing that Boras loves to use them to drive up the market for his clients, the Yankees decide to sit down with him to discuss Edwin Jackson, also knowing that the media will pick it up and the story would work in reverse to force the Mariners to finalize the trade.  Any time the Yankees are even rumored to be involved, teams have to take that seriously, and the Yankees used that in their advantage to make the deal they wanted to make, leaving Boras and Edwin Jackson sitting there twisting in the wind.  If that plan doesn't have Cash written all over it, I don't know what does.

- When you look at what the Reds gave up to get Mat Latos and what the Nats gave up to get Gio Gonzalez, this trade looks even better for the Yankees.  They managed to add a younger, arguably better pitcher than either of those 2 guys by only giving up 1 of their top prospects, and even managed to get a top 5 prospect back in return.

- AAAAAAAAAAAAND, when you think about all the potential deals that Jesus was either involved in or requested to be in by other teams that the Yankees didn't make, this trade is genius.  Instead of getting 3+ months of Cliff Lee or 1 year of John Danks, the Yankees get 5 of Pineda.  And they get those 5 years of  Pineda with ManBan and Betances still intact.

- With the FA class that's coming up after the 2012 season, the potential for a 2013 dream rotation is scary.  Let some of those hypotheticals roll around in your brain tonight when you're out at the bar.

- The biggest bummer about losing Montero?  I didn't get to use this Photoshop nearly enough: 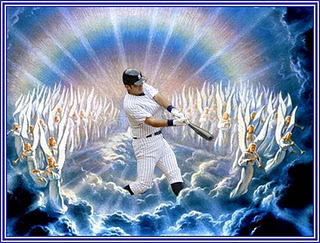 This was a great trade for the Yankees, and another brilliant job by Cash of laying low, working things behind the scenes, staying patient, and striking when the moment was right.  Yes, it sucks to lose out on Montero and all that he could have potentially done in a Yankee uniform, but this was the ideal return in a trade involving The Jesus, and the 2012 Yankees are better off as a result.
Posted by Unknown at 10:45 AM 3 comments: