Nova's Thinking About It All Wrong 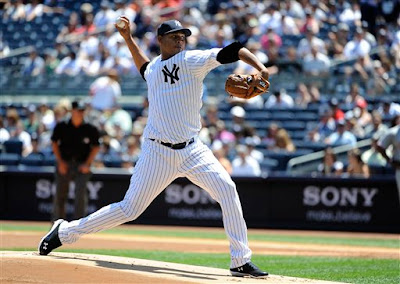 I like that Ivan Nova recognizes that he has to change something about his approach with the way he's getting beat right now.  And I appreciate that he has a plan in mind based off of what type of pitcher he is and what he knows he has to do to be successful.  It's encouraging to see a pitcher this young be so upfront about his performance.  But I question whether this change in approach would be the right change to make.

“It doesn’t matter if I get a strikeout or not.  I used to pitch with a lot of ground balls. This year I haven’t. I guess I’ve just got to go back and do exactly the same thing as last year, getting my ground balls and a strikeout when you need it.” (Nova after yesterday's game)

I see what you're trying to do there, Ivan.  You're trying to go back to what's given you the most success in the past.  But what you're forgetting is that strikeouts do matter and they're way better than groundouts.  Any time you're getting an out without giving the hitter a chance to put the ball in play, that's a good thing.  The strides you've made over the past year to improve your stuff and your control to get more strikeouts (career-high 9.55 K/9 this season) and cut down on your walks (career-low 2.94 BB/9 this season) are both positive strides.  That's what has raised your ceiling from a back-of-the-rotation depth arm to a potential above-average #3 starter.  You want to keep doing that. 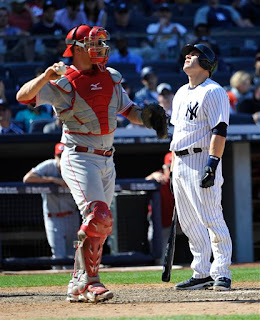 Day game after a night game and the altered lineup was even more altered than usual thanks to the current Yankee health situation.  Teix was out again so Swish was playing first base, Ibanez was playing right field and batting 5th, Cano got a day at DH, Wise was back in left field, and Nix was playing 2nd.  To add to the scattered situation, Ivan Nova was making his first start after leaving early with his foot/ankle injury earlier in the week and all eyes would be on him early to make sure the injury wasn't affecting him.

- Nova didn't appear to be suffering any ill effects of the injury, but his performance was more of the same.  The stuff was very good, but his fastball command was spotty at best and he missed with some offspeed stuff up and paid for it.

- Through 3 innings, Nova had recorded 8 of his 9 outs via strikeout (7 of them swinging and 5 on the curveball), but a pair of walks and 2 doubles given up led to a 2-0 Cincy lead.

- I didn't think it was right to bat Russell Martin 7th today, even with the 2 guys behind him being Dewayne Wise and Jayson Nix, but Martin hit the first pitch he saw in the game for a HR to right to lead off the bottom of the 3rd.  More of this please, Russ.

- Nova's misplaced offspeed stuff continued to bite him in the ass in the 5th when he left a slider up in the zone with two runners on to Joey Votto.  Not a lot of pitchers get away with that, and Nova didn't either as Votto hit a 3-run homer to right-center for a 5-2 Reds lead.

- The offense put a few more on the board, on a Raul Ibanez RBI double in the 4th and a Nix HR in the 5th (his 2nd in the last week), but went silent again in the later innings.  That lack of production loomed large after Cincy tacked on a cheap run in the 8th on a single, walk, and a couple of sacrifices against David Phelps, who didn't help his cause with a costly error after a great catch.

- Aroldis Chapman has been the NL version of Dave Robertson this season, and in his first appearance at Yankee Stadium he put on a show, striking out C-Grand and Cano swinging with fastballs and getting A-Rod to pop out in the bottom of the 8th.

- Shawn Marshall replaced Chapman for the 9th, and apparently he was just what the Yankee offense needed.  Ibanez led off with a double, and was quickly singled home by Nick Swisher.  After a Martin K, Andruw Jones singled Swish to third base, and Nix followed with an RBI single to pull the Yankees within 1.  They had 2 on, only 1 out, and Marshall gave way to Jose Arredondo.

- The Yankees made it interesting, but Arredondo did the job to preserve the win.  I question Jeter's decision to swing first pitch in a 2 on/1 out situation in the 9th, and I hated Curtis Granderson swinging and fouling off a hittable 3-0 fastball.  That's just kind of how it's been going for the offense lately.