We're still 11 days from pitchers and catchers reporting to Tampa, but that didn't stop Derek Jeter from continuing his preseason preparation/comeback from the litany of leg injuries that limited him in 2013.  Jeter worked out at the team's complex this morning, taking both live batting practice and fielding grounders at short for the first time since finally shutting it down last season.

Anthony McCarron had the specifics of the session, 39 swings and 34 grounders if you're interested, and Jeter was typical Jeter when asked about the workout by the media:

“Everything is good so far, knock on word...

This offseason is like a normal offseason.  I’m four months ahead of where I was last year. Last year, quite honestly, I want to forget about it.”

Another step in the right direction for The Captain.  We still need to see how he handles full games and playing multiple games in a row to get a good idea of how he'll be once the regular season starts, but live BP and live grounders beats doing nothing in a walking boot 25 hours a day, 8 days a week.
Posted by Unknown at 4:30 PM No comments: 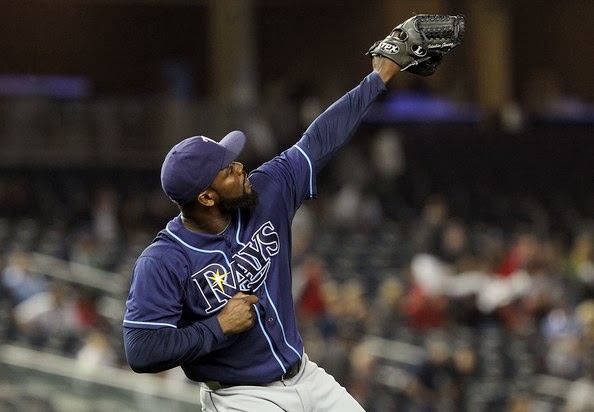 Monday Mid-Morning Food For Thought: Who Is The Real Preston Claiborne?

Preston Claiborne's first 2 months as a Major Leaguer in 2013:

Preston Claiborne's last 2 months of the season in 2013:

If you've got your calculators handy, that's a 1.46 ERA/3.12 FIP split from May and June compared to an 8.80/6.98 split in August and September.  Claiborne was due to regress after his unsustainably hot start last year, and regress he did, but I don't think anybody anticipated his finish to the season being as disastrous as it was.  He's the de facto "7th Inning Guy" right now and the question is what type of pitcher will he be in that role?  While a repeat of either one of those extremes is unlikely, where his 2014 performance falls in the middle of them is a big unknown.  Something shaded closer to the bad side of the extreme might not be good enough for a regular middle relief role.

Between Super Bowl parties and giving my hands and wrists a rest after Prospect Week, it was relatively quiet around AB4AR this weekend.  Yankeeland responded by staying similarly quiet, but there was one bit of news that most everyone touched on on Saturday.  The KC Royals DFA'd utility man Emilio Bonifacio and a good chunk of the Yankosphere reacted like this:

Alright, maybe it wasn't that enthusiastic, but really?  Is that how bad the Yankee infield situation is?  Bad enough that we're going to try to talk ourselves into Emilio Bonifacio being a viable option?  I guess he's no worse than the Nunezes or Annas of the world, but how much better is he going to be?  Dude's a below-average hitter with next to no power, an average at best defensive player, and he comes with a $3.5 million price tag for this season.  Do the Yankees need infield help that badly that it's worth paying that money and trading a player to get him?  I don't think so.  I guess it couldn't hurt to bring him to camp and let him compete for a job, but that's about as far as I'd be willing to go in terms of evaluating the guy.
Posted by Unknown at 7:55 AM No comments: