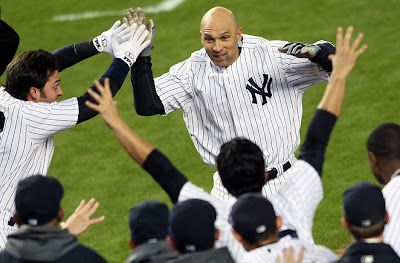 With starting pitching always being the top priority every offseason, taking care of internal player contracts second, looking to address the lineup through trades or the free agent market third, and the bullpen fourth, the Yankee bench has been a bit of a forgotten element the last few years.  Not forgotten in the sense that the Yankees don't focus on building a quality bench, but in the sense that the strategy to build has become very simple; see what money is left and see what older veteran players out there fit the Yankee hitting formula and need a job.  It's a strategy that's served them well, but one that was questioned a bit more before this season, especially by me in my "Known/Unknown" bench preview, as Cash really looked towards some guys who were pretty long in the tooth at the expense of younger internal options.
Read more »
Posted by Unknown at 2:30 PM No comments:

The World Series ended last night, which means Tim Lincecum is probably smoking a lot of celebratory weed right now.  It also means that the clock officially starts ticking on all the major offseason milestones, the first one being the deadline for teams to make qualifying offers to their pending free agents.  If you aren't familiar with the new free agent system, here's a quick rundown of how it works now.

There are no more Type A or Type B free agents; there is now a level set every year based on the average value of the 125 biggest contracts in MLB that teams can offer to any pending free agent who spent the entire previous season on their roster.  This year that value is $13.3 million.  Teams have until 5 days after the World Series to offer a qualifying deal to any pending free agent on their team who fits the criteria and then that player has 7 days to accept or decline the offer.  If they accept, they return to their team on a 1-year deal for the qualifying amount; if they decline, they are free to sign with any team and their former team is given a compensatory pick at the end of the first round of the next MLB draft.  Whatever new team the player ends up with does not have to surrender a pick, just the money that they are signing the free agent to.

The Yankees have a fair share of pending free agents this season, but only a few who are really worthy of having a qualifying offer extended to them.  As a helpful guide for the next 5 days, here is an all encompassing list of who should and should not receive an offer.