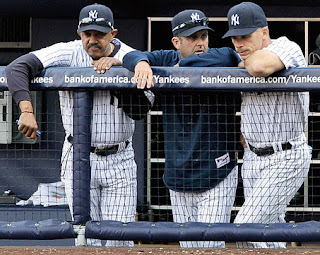 (Who would be joining these fine gentlemen on the bench today?  Courtesy of The AP)
A fun game to play during slow periods in the offseason is constructing the 25-man roster from what is currently available.  Since the entire offseason has basically been a slow period for the Yankees after they signed CC and Freddy, some sites are already turning to this post idea.  The problem, though, is that people aren't being real about their selections.  They're leaving the open bullpen and bench slots open, as if the Yankees were going to say, "you know what, we haven't signed or traded for the guys we really want in these roles, so we're just going to go with 21 players and some blank spaces if that's alright."  Come on, people.  That takes all the fun right of it.  If the season were starting tomorrow, the Yankees would have to at least have 25 warm bodies on the roster and on the bench to play the game, not "???" as the 4th outfielder or "--" as the long man out of the 'pen.  So I'll take it upon myself to play this game the RIGHT way and give you the 25-man roster as it would stand today.

The lineup and the rotation are obviously set (for now), so no big discussion points there.  But shit starts getting a little iffy as we move to the back of the bullpen and the bench area.  With Joba still on the shelf recovering from TJS until the summer, I looked at the rest of the guys on the 40-man and determined that George Kontos was the most likely to get a spot based on his 2011 body of work.  And with Hector Noesi already being penciled into the Triple-A rotation to keep him stretched out as a starter, Brad Meyers was the best option as long man out of the 'pen.**  With a core group of Mo-D-Rob, Sour Puss, Boone Logan, and Wade, that's still a damn good bullpen.

The bench, on the other hand, is a desolate wasteland of Quadruple-A talent.  Francisco Cervelli will likely be on as a 3rd catcher again since the Yankees don't seem interested in having Jesus carry that load on his own.  And for now, it would be Nunez, Dickerson, and Laird filling out the backup spots, although those are the spots most subject to change if the Yankees agree to new deals with guys like Andruw Jones and Nakajima.  Hopefully they do make some deals to beef up the bench, because I could probably grab 3 people from around my office to fill those spots and our production would be comparable.

It's not as strong or as deep as it will be once Spring Training rolls around.  But you have to work with what you've got, and right now this is the roster the Yankees would have to roll with if Game 1 was tomorrow.

**- If you didn't want a 7-man bullpen, substitute somebody like Ramiro Pena or Justin Maxwell in as a 5th bench body for Meyers.
Posted by Unknown at 9:52 AM No comments:

Yankees Once Again The Most Evil Empire

With Kim Jong-Il dying today, that has to put the New York Yankees back at #1 on the list of Evil Empires in the world, right?  I mean, they haven't exactly been bullying other teams around and flexing their evil muscles this offseason, but they're still pretty evil.  And true evil sometimes stays low on the radar, to lure others into a false sense of security.  No doubt that's what the Yankees have been doing, just biding their time, letting old KJ mentally and physically over-work himself to death and then swooping in once he croaks to re-assume the evil throne that is rightfully theirs.  Jong-il's goofy little son may be running the show in North Korea now, but that goober doesn't hold a candle to Hank and Hal, or Cash for that matter.

It wouldn't shock me at all if it turned out the Yankees had a hit man on that train with Kim, and Cash gave the go word on the hit personally.  It'd certainly be the biggest move by the Yankees so far this offseason if he did.

P.S.- If anybody from North Korea is reading this, I'm just playin'.
Posted by Unknown at 7:08 AM No comments: